Greg Clark (UC Davis and London School of Economics) deserves enormous credit for producing a large multi-generational dataset which is relevant to some of the most fundamental issues in social science: inequality, economic development, social policy, wealth formation, meritocracy, and recent human evolution. If you have even a casual interest in the dynamics of human society you should study these results carefully...
See previous discussion on this blog.
Clark recently posted this preprint on his web page. A book covering similar topics is forthcoming.

For Whom the Bell Curve Tolls: A Lineage of 400,000 English Individuals 1750-2020 shows Genetics Determines most Social Outcomes

Economics, Sociology, and Anthropology are dominated by the belief that social outcomes depend mainly on parental investment and community socialization. Using a lineage of 402,000 English people 1750-2020 we test whether such mechanisms better predict outcomes than a simple additive genetics model. The genetics model predicts better in all cases except for the transmission of wealth. The high persistence of status over multiple generations, however, would require in a genetic mechanism strong genetic assortative in mating. This has been until recently believed impossible. There is however, also strong evidence consistent with just such sorting, all the way from 1837 to 2020. Thus the outcomes here are actually the product of an interesting genetics-culture combination.

The correlational results in the table below were originally deduced by Fisher under the assumption of additive genetic inheritance: h2 is heritability, m is assortativity by genotype, r assortativity by phenotype. (Assortative mating describes the tendency of husband and wife to resemble each other more than randomly chosen M-F pairs in the general population.)

Fisher, R. A. 1918. “The Correlation between Relatives on the Supposition of Mendelian Inheritance.” Transactions of the Royal Society of Edinburgh, 52: 399-433

Thanks to Clark the predictions of Fisher's models, applied to social outcomes, can now be compared directly to data through many generations and across many branches of English family trees. (Figures below from the paper.) 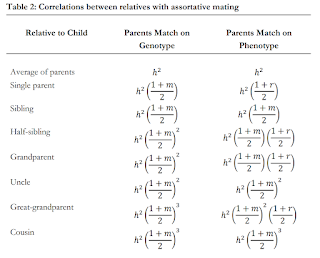 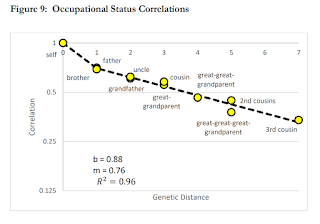 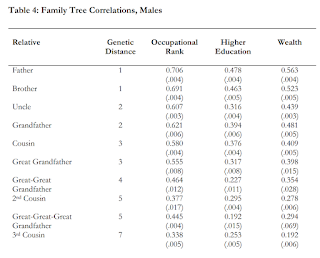 The additive model fits the data well, but requires high heritabilities h2 and a high level m of assortative mating. Most analysts, including myself, thought that the required values of m were implausibly large. However, using modern genomic datasets one can estimate the level of assortative mating by simply looking at the genotypes of married couples.
From the paper:

It is not mysterious how this happens. The phenotype measure here is just the number of years of education. But when couples interact they will have a much more refined sense of what the intellectual abilities of their partner are: what is their general knowledge, ability to reason about the world, and general intellectual ability. Somehow in the process of matching modern couples in England are combining based on the weighted sum of a set of variations at several hundred locations on the genome, to the point where their correlation on this measure is 0.65. 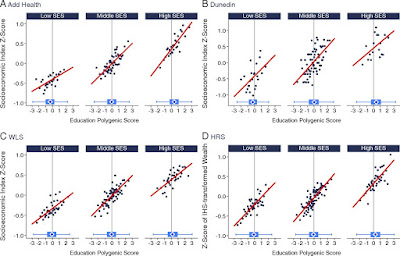