[ NOTE: The PNAS paper discussed below uses the SSGAC EA3 genomic predictor, trained on over a million genomes. The EA3 paper has now appeared in Nature Genetics. ]

The figure below shows SNP-based polygenic score and life outcome (socioeconomic index, on vertical axis) in four longitudinal cohorts, one from New Zealand (Dunedin) and three from the US. Each cohort (varying somewhat in size) has thousands of individuals, ~20k in total (all of European ancestry). The points displayed are averages over bins containing 10-50 individuals. For each cohort, the individuals have been grouped by childhood (family) social economic status. Social mobility can be predicted from polygenic score. Note that higher SES families tend to have higher polygenic scores on average -- which is what one might expect from a society that is at least somewhat meritocratic. The cohorts have not been used in training -- this is true out-of-sample validation. Furthermore, the four cohorts represent different geographic regions (even, different continents) and individuals born in different decades.

Everyone should stop for a moment and think carefully about the implications of the paragraph above and the figure below. 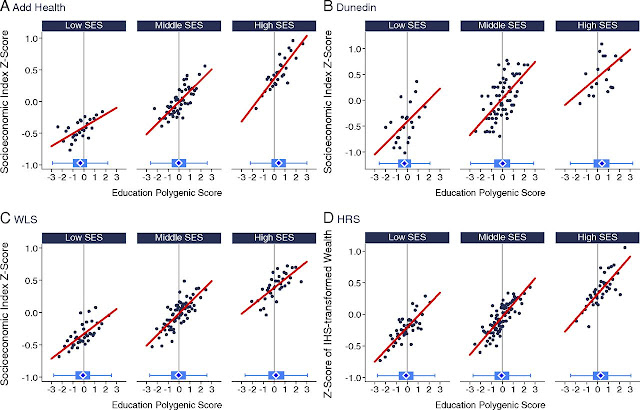 Caption from the PNAS paper.

A summary genetic measure, called a “polygenic score,” derived from a genome-wide association study (GWAS) of education can modestly predict a person’s educational and economic success. This prediction could signal a biological mechanism: Education-linked genetics could encode characteristics that help people get ahead in life. Alternatively, prediction could reflect social history: People from well-off families might stay well-off for social reasons, and these families might also look alike genetically. A key test to distinguish biological mechanism from social history is if people with higher education polygenic scores tend to climb the social ladder beyond their parents’ position. Upward mobility would indicate education-linked genetics encodes characteristics that foster success. We tested if education-linked polygenic scores predicted social mobility in >20,000 individuals in five longitudinal studies in the United States, Britain, and New Zealand. Participants with higher polygenic scores achieved more education and career success and accumulated more wealth. However, they also tended to come from better-off families. In the key test, participants with higher polygenic scores tended to be upwardly mobile compared with their parents. Moreover, in sibling-difference analysis, the sibling with the higher polygenic score was more upwardly mobile. Thus, education GWAS discoveries are not mere correlates of privilege; they influence social mobility within a life. Additional analyses revealed that a mother’s polygenic score predicted her child’s attainment over and above the child’s own polygenic score, suggesting parents’ genetics can also affect their children’s attainment through environmental pathways. Education GWAS discoveries affect socioeconomic attainment through influence on individuals’ family-of-origin environments and their social mobility.


Note Added from comments: Plots would look much noisier if not for averaging many individuals into single point. Keep in mind that socioeconomic success depends on a lot more than just cognitive ability, or even cognitive ability + conscientiousness.

But, underlying predictor correlates ~0.35 with actual educational attainment, IIRC. That is, the polygenic score predicts EA about as well as standardized tests predict success in schooling.

This means you can at least use it to identify outliers: just as a very high/low test score (SAT, ACT, GRE) does not *guarantee* success/failure in school, nevertheless the signal is useful for selection = admissions. 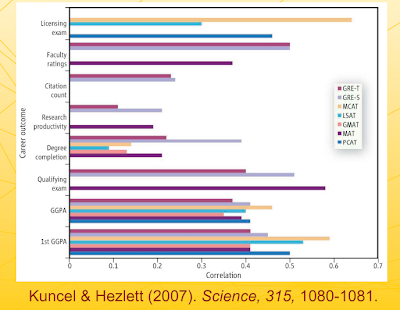