I had reason to look back at the paper below recently, and thought I would write a longer post on the subject as I regularly see searches on "QED theta angle" and similar in my traffic logs. These readers may be unsatisfied with the standard textbook treatment of this topic.

The conventional thinking is that because FF-dual in QED is a total derivative, doesn't affect the classical equations of motion, and isn't related to any topological vacuum structure, it can't have physical consequences.

In the paper below I constructed gauge configurations in (3+1) dimensions that connect an initial configuration (e.g., vacuum state A=0) to two different final configurations A1 and A2 (e.g., in the far future). A1 and A2 differ by a gauge transformation (i.e., represent the same physical electric and magnetic fields), but the two (3+1) interpolating configurations are not gauge equivalent. By construction, the value of \int FF-dual is not the same when evaluated on the two (3+1) configurations. Thus the two trajectories have a relative phase weighting in the path integral which depends on the value of theta. This suggests that theta can have physical (though perhaps small and non-perturbative) effects, so it is indeed a fundamental physical parameter of QED and of the Standard Model of particle physics.

We describe paths in the configuration space of (3+1) dimensional QED whose relative quantum phase (or relative phase in the functional integral) depends on the value of the theta angle. The final configurations on the two paths are related by a gauge transformation but differ in magnetic helicity or Chern-Simons number. Such configurations must exhibit gauge potentials that fall off no faster than 1/r in some region of finite solid angle, although they need not have net magnetic charge (i.e., are not magnetic monopoles). The relative phase is proportional to theta times the difference in Chern-Simons number. We briefly discuss some possible implications for QCD and the strong CP problem.

The question of whether physical observables can depend on the value of theta QED is somewhat esoteric. However, the analysis raises the issue of asymptotic boundary conditions in gauge theory. One typically expects that local properties of a quantum field theory are independent of the choice of boundary conditions when the size of the system is taken to infinity. But topological or total derivative terms such as FF-dual seem to defy this expectation.

The gauge potentials required for the construction described above must have  A ~ 1/r  behavior for some region of solid angle. In d=4 Euclidean space, the assumption is often made to allow only potentials with faster than 1/r falloff. In this way one obtains a topological classification of gauge configurations (i.e., in terms of instanton number). However, in Minkowski space (d=3+1) there exist classical solutions of non-Abelian gauge theory (e.g., SU(2); discovered by Luscher and Schecter) that exhibit 1/r falloff and are the analog of the U(1) configurations I described above. These L-S solutions have fractional topological charge.

In the presence of fractional topological charges the gauge theory partition function no longer appears periodic in theta. This may have consequences for the Strong CP problem in QCD, which are briefly discussed in the paper above.

Note Added: Writing this blog post was beneficial -- thinking through the topic again allowed me to formulate the conclusions more clearly than in the original paper. I've replaced it on arXiv with a new version containing the additional material below. The observation at the end is related to Elitzur's Theorem -- gauge-variant operators must have zero average in the path integral. 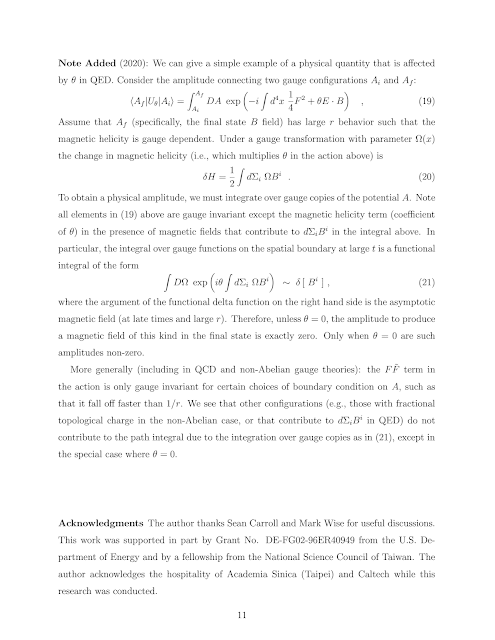