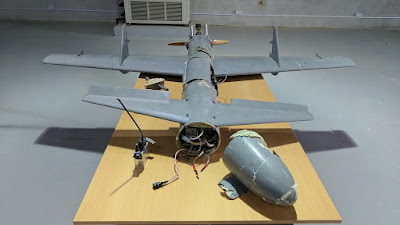 The Iranian / Houthi drone shown above might look like a toy, but it is likely capable of flying hundreds of miles, perhaps using GPS guidance and optical imaging for final targeting. Compare to the hobbyist radio controlled jet aircraft in the video at bottom. These weapons are inexpensive and easy to engineer, yet potentially very effective.

In Machine Intelligence Threatens Overpriced Aircraft Carriers (2017) I noted that


Within ~10y (i.e., well within projected service life of US carriers) I expect missile systems of the type currently only possessed by Russia and PRC to be available to lesser powers. I expect that a road-mobile ASBM weapon with good sensor/ML capability, range ~1500km, will be available for ~$10M. Given a rough (~10km accuracy) fix on a carrier, this missile will be able to arrive in that area and then use ML/sensors for final targeting. There is no easy defense against such weapons. Cruise missiles which pose a similar threat will also be exported. This will force the US to be much more conservative in the use of its carriers, not just against Russia and PRC, but against smaller countries as well.

... Basic missile technology is old, well-understood, and already inexpensive (compared, e.g., to the cost of fighter jets). ML/sensor capability is evolving rapidly and will be enormously better in 10y. ... Despite BS claims over the years (and over $100B spent by the US), anti-missile technology is not effective...

One only has to localize the carrier to within few x 10km for initial launch, letting the smart final targeting do the rest. The initial targeting location can be obtained through many methods, including aircraft/drone probes, targeting overflight by another kind of missile, LEO micro-satellites, or even (surreptitious) cooperation from Russia/PRC (or a commercial vendor!) via their satellite network.

Anthony Cordesman writes for the Center for Strategic and International Studies (CSIS):


The Strategic Implications of the Strikes on Saudi Arabia:

.. UCAV/RPV (drone) and cruise missile attacks offer precision strike options with high levels of accuracy from small, easily dispersible systems that are very hard to locate and target... Iranian systems do have both GPS and imagery capability to home in even more precisely on a target. UCAV/RPVs and cruise missiles are also small air defense targets compared to fighters, can fly evasively, and have flight profiles that are hard to detect. Saudi fighter and SAM intercept capabilities to cover wide areas with any effectiveness are uncertain, and ballistic missile defenses can only cope with a different threat.

This is why the success of the existing strikes will – at a minimum — act as a major incentive to Iran, the Hezbollah, and other such powers to develop such forces as well as precision guided ballistic missiles and cruise missiles.

... Looking further into the future, the strikes on Saudi Arabia provide a clear strategic warning that the US era of air supremacy in the Gulf, and the near U.S. monopoly on precision strike capability, is rapidly fading. UCAV/RPVs, cruise missiles, and precision strike ballistic missiles are all entering Iranian inventory and have begun to spread to the Houthi and Hezbollah. Nations like North Korea are following, and other areas of military confrontation like India and Pakistan will follow. All of these systems can be used at low levels of conflict intensity and in “gray area” wars...

We are entering an era in which an inexpensive, easy to obtain device can fly rapidly (~500mph if jet powered), evasively, and automatically to a designated GPS coordinate. It can even use visual or radar information to adjust final targeting. Terrorists could easily attack any public event: i.e., large stadium (sporting event or concert), public speech by politician, etc. They could also attack key infrastructure such as a power station or oil pipeline/refinery. It's the era of the mobile smart IED...