John Schulman is a research scientist at OpenAI. He co-leads the Reinforcement Learning group and works on agent learning in virtual game worlds (e.g., Dota) as well as in robotics. John, Corey, and Steve talk about AI, AGI (Artificial General Intelligence), the Singularity (self-reinforcing advances in AI which lead to runaway behavior that is incomprehensible to humans), and the creation and goals of OpenAI. They discuss recent advances in language models (GPT-2) and whether these results raise doubts about the usefulness of linguistic research over the past 60 years. Does GPT-2 imply that neural networks trained using large amounts of human-generated text can encode "common sense" knowledge about the world? They also discuss what humans are better at than current AI systems, and near term examples of what is already feasible: for example, using AI drones to kill people.

In mathematics, a manifold is a topological space that locally resembles Euclidean space near each point.

Steve Hsu and Corey Washington have been friends for almost 30 years, and between them hold PhDs in Neuroscience, Philosophy, and Theoretical Physics. Join them for wide ranging and unfiltered conversations with leading writers, scientists, technologists, academics, entrepreneurs, investors, and more.

Steve Hsu is VP for Research and Professor of Theoretical Physics at Michigan State University. He is also a researcher in computational genomics and founder of several Silicon Valley startups, ranging from information security to biotech. Educated at Caltech and Berkeley, he was a Harvard Junior Fellow and held faculty positions at Yale and the University of Oregon before joining MSU.

Corey Washington is Director of Analytics in the Office of Research and Innovation at Michigan State University. He was educated at Amherst College and MIT before receiving a PhD in Philosophy from Stanford and a PhD in a Neuroscience from Columbia. He held faculty positions at the University Washington and the University of Maryland. Prior to MSU, Corey worked as a biotech consultant and is founder of a medical diagnostics startup.


Sporting my OpenAI t-shirt. Wish I had worn this at Number 10 Downing Street earlier this week ;-) 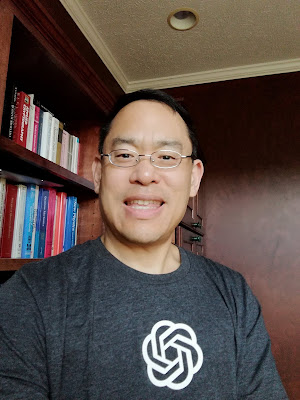