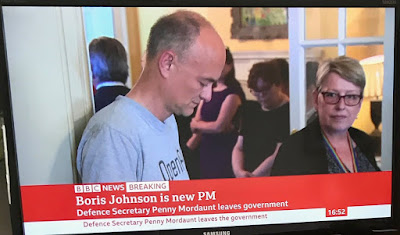 Why Dominic Cummings is Johnson’s most important appointment (Spectator)

The closest analogy to the government Boris Johnson is forming is Blair’s and Brown’s New Labour government of 1997, when they appointed super powerful political advisers – Campbell, Powell, Balls, Whelan – to boss conservative Whitehall.

That is what Johnson is doing – in spades – by making former Vote Leave campaign chief Dominic Cummings his de facto chief executive as senior advisor, because Cummings is NEVER a passive adviser. Cummings has an extraordinary sense of purpose and objectives – and pity those who get in his path.

Cummings’s mandate is to deliver Brexit in 99 days, and in his spare time he’ll endeavour to reform Whitehall, since one of his obsessions is that the civil service is unfit for modern government. Sir Humphrey will be anxious, but so too will ministers and many Tory MPs, including Brexiters, who still nurse bruises from their encounters with him when he ran Vote Leave and earlier when he was an adviser to Michael Gove.

As proof that Johnson is placing serious trust in Cummings is that so many of Cummings’s Vote Leave team are moving in to Downing Street: Lee Cain as director of communications, Rob Oxley as press secretary and Oliver Lewis as a Brexit policy adviser.