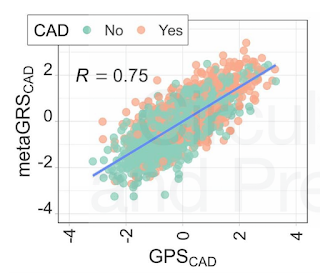 This study reports a validation of Polygenic Risk Scores for Coronary Artery Disease in a French Canadian population. Outliers in PRS are much more likely to have CAD than typical individuals.

In our replication tests of a variety of traits (both disease risks and quantitative traits) using European ancestry validation datasets, there is strong consistency in performance of the predictors. (See AUC consistency below.) This suggests that the genomic predictors are robust to differences in environmental conditions and also moderate differences in ethnicity (i.e., within the European population). The results are not brittle, and I believe that widespread clinical applications are coming very soon.

Abstract
Background: Coronary artery disease (CAD) represents one of the leading causes of morbidity and mortality worldwide. Given the healthcare risks and societal impacts associated with CAD, their clinical management would benefit from improved prevention and prediction tools. Polygenic risk scores (PRS) based on an individual's genome sequence are emerging as potentially powerful biomarkers to predict the risk to develop CAD. Two recently derived genome-wide PRS have shown high specificity and sensitivity to identify CAD cases in European-ancestry participants from the UK Biobank. However, validation of the PRS predictive power and transferability in other populations is now required to support their clinical utility.

Methods: We calculated both PRS (GPSCAD and metaGRSCAD) in French-Canadian individuals from three cohorts totaling 3639 prevalent CAD cases and 7382 controls, and tested their power to predict prevalent, incident and recurrent CAD. We also estimated the impact of the founder French-Canadian familial hypercholesterolemia deletion (LDLR delta > 15kb deletion) on CAD risk in one of these cohorts and used this estimate to calibrate the impact of the PRS.

Results: Our results confirm the ability of both PRS to predict prevalent CAD comparable to the original reports (area under the curve (AUC)=0.72-0.89). Furthermore, the PRS identified about 6-7% of individuals at CAD risk similar to carriers of the LDLR delta > 15kb mutation, consistent with previous estimates. However, the PRS did not perform as well in predicting incident or recurrent CAD (AUC=0.56-0.60), maybe due to confounding because 76% of the participants were on statin treatment. This result suggests that additional work is warranted to better understand how ascertainment biases and study design impact PRS for CAD.

Conclusions: Collectively, our results confirm that novel, genome-wide PRS are able to predict CAD in French-Canadians; with further improvements, this is likely to pave the way towards more targeted strategies to predict and prevent CAD-related adverse events.


"PRSs, built using very large data sets of people with and without heart disease, look for genetic changes in the DNA that influence disease risk, whereas individual genes might have only a small effect on disease predisposition," said Guillaume Lettre, Ph.D., lead author of the study and an associate professor at the Montreal Heart Institute and Université de Montréal in Montreal, Quebec, Canada. "The PRS is like having a snapshot of the whole genetic variation found in one's DNA and can more powerfully predict one's disease risk. Using the score, we can better understand whether someone is at higher or lower risk to develop a heart problem."

Early prediction would benefit prevention, optimal management and treatment strategies for heart disease. Because PRSs are simple and relatively inexpensive, their implementation in the clinical setting holds great promises. For heart disease, early detection could lead to simple yet effective therapeutic interventions such as the use of statins, aspirin or other medications.

... The American Heart Association named the use of polygenic risk scores as one of the biggest advances in heart disease and stroke research in 2018.


Sadly, reaction to these breakthroughs in human genomics will follow the usual pattern:


It's Wrong! Genomes are too complex to decipher, GWAS is a failure, precision medicine is all hype, biology is so ineffably beautiful and incomprehensible, Hey, whaddaya, you're a physicist! ...

It's Trivial! I knew it all along. Of course, everything is heritable to some degree. Well, if you just get enough data...