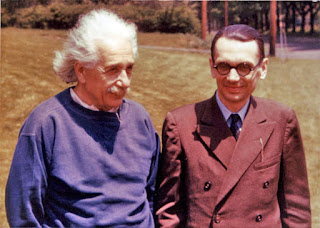 Ulam expresses so much in a few sentences! From his memoir, Adventures of a Mathematician. Above: Einstein and Godel. Bottom: von Neumann, Feynman, Ulam.


When it came to other scientists, the person for whom he [vN] had a deep admiration was Kurt Gödel. This was mingled with a feeling of disappointment at not having himself thought of "undecidability." For years Gödel was not a professor at Princeton, merely a visiting fellow, I think it was called. Apparently there was someone on the faculty who was against him and managed to prevent his promotion to a professorship. Johnny would say to me, "How can any of us be called professor when Gödel is not?" ...

As for Gödel, he valued Johnny very highly and was much interested in his views. I believe knowing the importance of his own discovery did not prevent Gödel from a gnawing uncertainty that maybe all he had discovered was another paradox à la Burali Forte or Russell. But it is much, much more. It is a revolutionary discovery which changed both the philosophical and the technical aspects of mathematics.

When we talked about Einstein, Johnny would express the usual admiration for his epochal discoveries which had come to him so effortlessly, for the improbable luck of his formulations, and for his four papers on relativity, on the Brownian motion, and on the photo-electric quantum effect. How implausible it is that the velocity of light should be the same emanating from a moving object, whether it is coming toward you or whether it is receding. But his admiration seemed mixed with some reservations, as if he thought, "Well, here he is, so very great," yet knowing his limitations. He was surprised at Einstein's attitude in his debates with Niels Bohr—at his qualms about quantum theory in general. My own feeling has always been that the last word has not been said and that a new "super quantum theory" might reconcile the different premises. 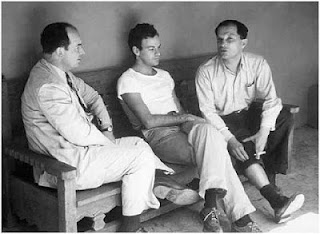