David Lubinski kindly shared the recent paper linked below. He and I will both be at ISIR 2019, the annual meeting of the International Society for Intelligence Research.

1. 13 year olds identified through talented and gifted programs, all of whom scored in the top 1% in at least one of Mathematical or Verbal ability (based on SAT score; some scored at the 1 in 10k level). They were also assessed using a preference inventory (SOV = Study of Values). About 10% of this cohort of 677 were identified 35 years later as having achieved "eminence" in their careers -- e.g., full professor at R1 university, senior executive status, ...

2. Exceptional STEM graduate students at top 15 PhD programs, evaluated using GRE and SOV. If I'm not mistaken many or all of these students were NSF Graduate Fellows. About 20% of this population of 605 had achieved STEM eminence 25 years later.

I would estimate that only about one in a thousand individuals drawn randomly from the general population attains eminence as defined in the paper. Thus, the talent selection used to form cohorts 1&2 (e.g., SAT administered at age 13) produced success rates as much as 100 times higher than in the base population.

Abstract
This investigation examined whether math/scientific and verbal/humanistic ability and preference constellations, developed on intellectually talented 13-year-olds to predict their educational outcomes at age 23, continue to maintain their longitudinal potency by distinguishing distinct forms of eminence 35 years later. Eminent individuals were defined as those who, by age 50, had accomplished something rare: creative and highly impactful careers (e.g., full professors at research-intensive universities, Fortune 500 executives, distinguished judges and lawyers, leaders in biomedicine, award-winning journalists and writers). Study 1 consisted of 677 intellectually precocious youths, assessed at age 13, whose leadership and creative accomplishments were assessed 35 years later. Study 2 constituted a constructive replication—an analysis of 605 top science, technology, engineering, and math (STEM) graduate students, assessed on the same predictor constructs early in graduate school and assessed again 25 years later. In both samples, the same ability and preference parameter values, which defined math/scientific versus verbal/humanistic constellations, discriminated participants who ultimately achieved distinct forms of eminence from their peers pursuing other life endeavors.

Note that even within both cohorts SAT / GRE were useful in predicting achievement outcomes. Click figures below for larger versions. 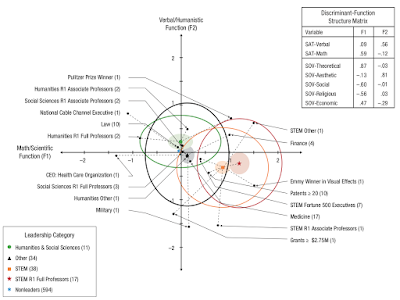 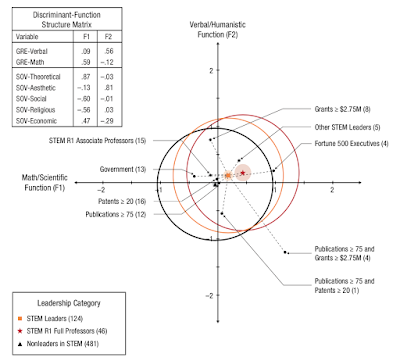