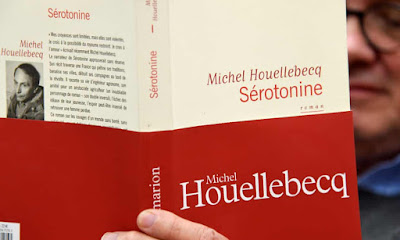 In Houellebecq on Tocqueville, Democracy, and Nietzsche (2015) I pointed out that most intellectuals and elites have been so strongly conditioned by the existing cultural hegemony that they cannot understand obvious realities about the world. In that case I referred specifically to Houellebecq's previous novel Soumission.

Events since 2015 -- Trump's election and populist movements in Europe -- have stimulated a vague (but distorted) understanding in the minds of brainwashed elites as to populist discontent, its causes and origins. The reaction of our "thought leaders" is to decry the (previously sacred) democratic process by which the masses exercise their limited influence on society.

Individuals who told me confidently before the election that Trump had no chance of winning now forget how wrong they were then. They continue to express great confidence in their understanding of world events and political/economic processes.

So few are capable of updating prior beliefs in the face of new information. So many are overconfident in their powers of rationality.

Houellebecq has shown again that he understands reality much better than his critics.


Guardian: Serotonin, the story of a lovesick agricultural engineer who writes trade reports for the French agriculture ministry and loathes the EU, has been hailed by the French media as scathing and visionary. The novel rails against politicians who “do not fight for the interests of their people but are ready to die to defend free trade”.

Written before the current gilets jaunes anti-government movement began blockading roundabouts and tollbooths across France, it features desperate farmers in Normandy who stage an armed blockade of roads amid police clashes.

... In a recent article for Harpers, Houellebecq lauded Donald Trump for his protectionist policies, calling him “one of the best American presidents I’ve ever seen”, and praised Brexit: “The British get on my nerves, but their courage cannot be denied.” Serotonin, which will be published in English in September, viciously criticises free trade.

In Houellebecq on Tocqueville, Democracy, and Nietzsche, Houellebecq discusses Tocqueville's insight concerning the manner in which democracy is likely to be subverted: by a soft tyranny that


Tocqueville (Democracy in America, chapter 6) ... covers the surface of society with a network of small complicated rules, minute and uniform, through which the most original minds and the most energetic characters cannot penetrate, to rise above the crowd. The will of man is not shattered, but softened, bent, and guided; men are seldom forced by it to act, but they are constantly restrained from acting. Such a power does not destroy, but it prevents existence; it does not tyrannize, but it compresses, enervates, extinguishes, and stupefies a people, till each nation is reduced to nothing better than a flock of timid and industrious animals, of which the government is the shepherd.

Soma, Serotonin, soft censorship of dangerous ideas -- call it what you will.

See also Paris 2018: Global Capital and Its Discontents.
Posted by Steve Hsu at 11:27 AM