The Life of this World 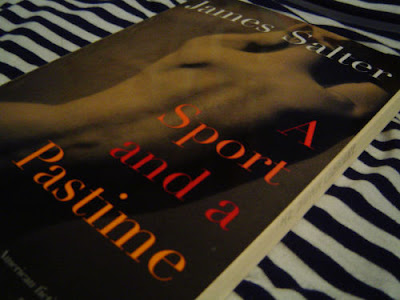 
I've been a fan of the writer James Salter (see also here) since discovering his masterpiece A Sport and a Pastime. Salter evokes Americans in France as no one since Hemingway in A Moveable Feast. The title comes from the Koran: Remember that the life of this world is but a sport and a pastime ... :-)

I can't think of higher praise than to say I've read every bit of Salter's work I could get my hands on.

For true Salter fans, a new (2017; he passed in 2015) collection of previously uncollected nonfiction: Don't Save Anything: Uncollected Essays, Articles, and Profiles. I especially liked the essay Younger Women, Older Men, originally published in Esquire in 1992.

From A Sport and a Pastime.

He describes it casually, without stooping to explain, but the authority of the act overwhelms me. If I had been an underclassman he would have become my hero, the rebel who, if I had only had the courage, I might have also become. ... Now, looking at him, I am convinced of all I missed. I am envious. Somehow his life seems more truthful than mine, stronger, even able to draw mine to it like the pull of a dark star.

He quit. It was too easy for him, his sister told me, and so he refused it. He had always been extraordinary in math. He had a scholarship. He knew he was exceptional. Once he took the anthropology final when he hadn’t taken the course. He wrote that at the top of the page. His paper was so brilliant the professor fell in love with him. Dean was disappointed, of course. It only proved how ridiculous everything was. ... He lived with various friends in New York and began to develop a style. ... in the end he quit altogether. Then he began educating himself.

She stoops with the match, inserts it, and the heater softly explodes. A blue flame rushes across the jets, then burns with a steady sound. There’s no other light in the room but this, which reflects from the floor. She stands up again. She drops the burnt match on the table and begins to arrange clothing on the grill of the heater, pajamas, spreading them out so they can be warmed. Dean helps her a bit. The silk, if it’s that, is quite cold. And there, back from the Vox opposite the Citroen garage, its glass doors now closed, they stand in the roaring dark. In a fond, almost brotherly gesture, he puts his arms around her. They hardly know one another. She accepts it without a word, without a movement, and they wait in a pure silence, the faint sweetness of gas in the air. After a while she turns the pajamas over. Her back is towards him. In a single move she pulls off her sweater and then, reaching behind herself in that elbow-awkward way, unfastens her brassiere. Slowly he turns her around.

From a message to a friend, who knew Salter, and asked me to articulate what I most admire about his work.


About 5 years ago I became friends with the writer Richard Ford, who offered to introduce me to his friend Salter. I was less enthusiastic to meet him than I would have been when he was younger. I did not go out of my way, and we never met.

Since he lived in Aspen, and I was often there in the summers at the Physics institute, I have sometimes imagined that we crossed paths without knowing it.

I admire, of course, his prose style. Sentence for sentence, he is the master.

But perhaps even more I admire his view of the world -- of courage, honor, daring to attempt the impossible, men and women, what is important in life.