Complex Trait Adaptation and the Branching History of Mankind

Note Added in response to 2020 Twitter mob attack which attempts to misrepresent my views:

This is not my research. The authors are affiliated with Columbia University and the New York Genome Center.

I do not work on evolutionary history or signals of recent natural selection, but I defend the freedom of other researchers to investigate it.

One has to make a big conceptual leap to claim this research implies group differences. The fact that a certain set of genetic variants has been under selection does not necessarily imply anything about overall differences in phenotype between populations. Nevertheless the work is interesting and sheds some light on natural selection in deep human history. 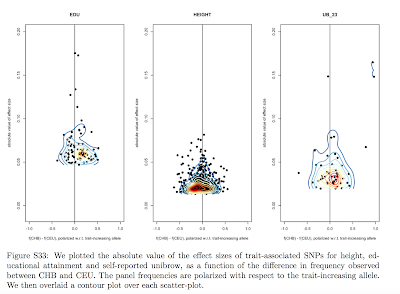 A new paper (94 pages!) investigates signals of recent selection on traits such as height and educational attainment (proxy for cognitive ability). Here's what I wrote about height a few years ago in Genetic group differences in height and recent human evolution:


These recent Nature Genetics papers offer more evidence that group differences in a complex polygenic trait (height), governed by thousands of causal variants, can arise over a relatively short time (~ 10k years) as a result of natural selection (differential response to varying local conditions). One can reach this conclusion well before most of the causal variants have been accounted for, because the frequency differences are found across many variants (natural selection affects all of them). Note the first sentence above contradicts many silly things (drift over selection, genetic uniformity of all human subpopulations due to insufficient time for selection, etc.) asserted by supposed experts on evolution, genetics, human biology, etc. over the last 50+ years. The science of human evolution has progressed remarkably in just the last 5 years, thanks mainly to advances in genomic technology.

Cognitive ability is similar to height in many respects, so this type of analysis should be possible in the near future. ...

The paper below conducts an allele frequency analysis on admixture graphs, which contain information about branching population histories. Thanks to recent studies, they now have enough data to run the analysis on educational attainment as well as height. Among their results: a clear signal that modern East Asians experienced positive selection (~10kya?) for + alleles linked to educational attainment (see left panel of figure above; CHB = Chinese, CEU = Northern Europeans). These variants have also been linked to neural development.


We find evidence for polygenic adaptation in East Asian populations at variants that have been associated with educational attainment in European GWAS. This result is robust to the choice of data we used (1000 Genomes or Lazaridis et al. (2014) panels). Our modeling framework suggests that selection operated before or early in the process of divergence among East Asian populations - whose earliest separation dates at least as far back as approximately 10 thousand years ago [42, 43, 44, 45] - because the signal is common to different East Asian populations (Han Chinese, Dai Chinese, Japanese, Koreans, etc.). The signal is also robust to GWAS ascertainment (Figure 6), and to our modeling assumptions, as we found a significant difference between East Asian and non- East-Asian populations even when performing a simple binomial sign test (Tables S4, S9, S19 and S24).