I have not, until recently, invested significant time in trying to understand climate modeling. These notes are primarily for my own use, however I welcome comments from readers who have studied this issue in more depth.

I take a dim view of people who express strong opinions about complex phenomena without having understood the underlying uncertainties. I have yet to personally encounter anyone who claims to understand all of the issues discussed below, but I constantly meet people with strong views about climate change.

See my old post on epistemic caution Intellectual honesty: how much do we know?


... when it comes to complex systems like society or economy (and perhaps even climate), experts have demonstrably little predictive power. In rigorous studies, expert performance is often no better than random.

... worse, experts are usually wildly overconfident about their capabilities. ... researchers themselves often have beliefs whose strength is entirely unsupported by available data.

Now to climate and CO2. AFAIU, the direct heating effect due to increasing CO2 concentration is only a logarithmic function (all the absorption is in a narrow frequency band). The main heating effects in climate models come from secondary effects such as water vapor distribution in the atmosphere, which are not calculable from first principles, nor under good experimental/observational control. Certainly any "catastrophic" outcomes would have to result from these secondary feedback effects.

The first paper below gives an elementary calculation of direct effects from atmospheric CO2. This is the "settled science" part of climate change -- it depends on relatively simple physics. The prediction is about 1 degree Celsius of warming from a doubling of CO2 concentration. Anything beyond this is due to secondary effects which, in their totality, are not well understood -- see second paper below, about model tuning, which discusses rather explicitly how these unknowns are dealt with.

We show how the CO2 contribution to the Earth’s greenhouse effect can be estimated from relatively simple physical considerations and readily available spectroscopic data. In particular, we present a calculation of the “climate sensitivity” (that is, the increase in temperature caused by a doubling of the concentration of CO2) in the absence of feedbacks. Our treatment highlights the important role played by the frequency dependence of the CO2 absorption spectrum. For pedagogical purposes, we provide two simple models to visualize different ways in which the atmosphere might return infrared radiation back to the Earth. The more physically realistic model, based on the Schwarzschild radiative transfer equations, uses as input an approximate form of the atmosphere’s temperature profile, and thus includes implicitly the effect of heat transfer mechanisms other than radiation.


... The question of feedbacks, in its broadest sense, is the whole question of climate change: namely, how much and in which way can we expect the Earth to respond to an increase of the average surface temperature of the order of 1 degree, arising from an eventual doubling of the concentration of CO2 in the atmosphere? And what further changes in temperature may result from this response? These are, of course, questions for climate scientists to resolve. ...

The paper below concerns model tuning. It should be apparent that there are many adjustable parameters hidden in any climate model. One wonders whether the available data, given its own uncertainties, can constrain this high dimensional parameter space sufficiently to produce predictive power in a rigorous statistical sense.

The first figure below illustrates how different choices of these parameters can affect model predictions. Note the huge range of possible outcomes! The second figure below illustrates some of the complex physical processes which are subsumed in the parameter choices. Over longer timescales, (e.g., decades) uncertainties such as the response of ecosystems (e.g., plant growth rates) to increased CO2 would play a role in the models. It is obvious that we do not (may never?) have control over these unknowns.


THE ART AND SCIENCE OF CLIMATE MODEL TUNING

... Climate model development is founded on well-understood physics combined with a number of heuristic process representations. The fluid motions in the atmosphere and ocean are resolved by the so-called dynamical core down to a grid spacing of typically 25–300 km for global models, based on numerical formulations of the equations of motion from fluid mechanics. Subgrid-scale turbulent and convective motions must be represented through approximate subgrid-scale parameterizations (Smagorinsky 1963; Arakawa and Schubert 1974; Edwards 2001). These subgrid-scale parameterizations include coupling with thermodynamics; radiation; continental hydrology; and, optionally, chemistry, aerosol microphysics, or biology.

Parameterizations are often based on a mixed, physical, phenomenological and statistical view. For example, the cloud fraction needed to represent the mean effect of a field of clouds on radiation may be related to the resolved humidity and temperature through an empirical relationship. But the same cloud fraction can also be obtained from a more elaborate description of processes governing cloud formation and evolution. For instance, for an ensemble of cumulus clouds within a horizontal grid cell, clouds can be represented with a single-mean plume of warm and moist air rising from the surface (Tiedtke 1989; Jam et al. 2013) or with an ensemble of such plumes (Arakawa and Schubert 1974). Similar parameterizations are needed for many components not amenable to first-principle approaches at the grid scale of a global model, including boundary layers, surface hydrology, and ecosystem dynamics. Each parameterization, in turn, typically depends on one or more parameters whose numerical values are poorly constrained by first principles or observations at the grid scale of global models. Being approximate descriptions of unresolved processes, there exist different possibilities for the representation of many processes. The development of competing approaches to different processes is one of the most active areas of climate research. The diversity of possible approaches and parameter values is one of the main motivations for model inter-comparison projects in which a strict protocol is shared by various modeling groups in order to better isolate the uncertainty in climate simulations that arises from the diversity of models (model uncertainty). ...

... All groups agreed or somewhat agreed that tuning was justified; 91% thought that tuning global-mean temperature or the global radiation balance was justified (agreed or somewhat agreed). ... the following were considered acceptable for tuning by over half the respondents: atmospheric circulation (74%), sea ice volume or extent (70%), and cloud radiative effects by regime and tuning for variability (both 52%). 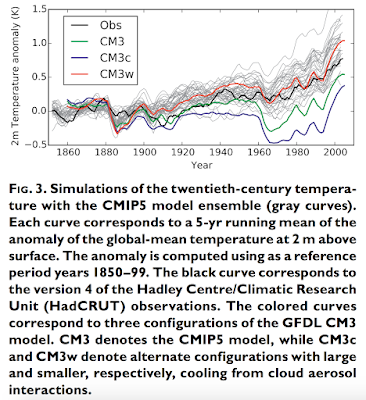 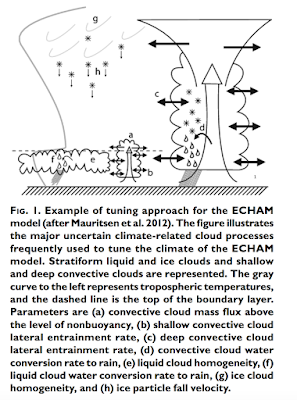 Here is Steve Koonin, formerly Obama's Undersecretary for Science at DOE and a Caltech theoretical physicist, calling for a "Red Team" analysis of climate science, just a few months ago (un-gated link):


WSJ: ... The outcome of a Red/Blue exercise for climate science is not preordained, which makes such a process all the more valuable. It could reveal the current consensus as weaker than claimed. Alternatively, the consensus could emerge strengthened if Red Team criticisms were countered effectively. But whatever the outcome, we scientists would have better fulfilled our responsibilities to society, and climate policy discussions would be better informed.


Note Added: In 2014 Koonin ran a one day workshop for the APS (American Physical Society), inviting six leading climate scientists to present their work and engage in an open discussion. The APS committee responsible for reviewing the organization's statement on climate change were the main audience for the discussion. The 570+ page transcript, which is quite informative, is here. See Physics Today coverage, and an annotated version of Koonin's WSJ summary.

Below are some key questions Koonin posed to the panelists in preparation for the workshop. After the workshop he declared that The idea that “Climate science is settled” runs through today’s popular and policy discussions. Unfortunately, that claim is misguided.


The estimated equilibrium climate sensitivity to CO2 has remained between 1.5 and 4.5 in the IPCC reports since 1979, except for AR4 where it was given as 2-5.5.

What gives rise to the large uncertainties (factor of three!) in this fundamental parameter of the climate system?

How is the IPCC’s expression of increasing confidence in the detection/attribution/projection of anthropogenic influences consistent with this persistent uncertainty?

I seriously doubt that the process by which the 1.5 to 4.5 range is computed is statistically defensible. From the transcript, it appears that IPCC results of this kind are largely the result of "Expert Opinion" rather than a specific computation! It is rather curious that the range has not changed in 30+ years, despite billions of dollars spent on this research. More here.
Posted by Steve Hsu at 9:43 AM

Yesterday, while I was at work, my sister stole my iPad and tested to see if it can survive a 25 foot drop, just so she can be a youtube sensation. My apple ipad is now destroyed and she has 83 views. I know this is entirely off topic but I had to share it with someone!