Note, as far as I can tell the authors don't normalize the SD by mean value for each gender to obtain the typical percentage fluctuation (a dimensionless quantity). The male brain is about 10% larger and each of the subregions is roughly that much bigger as well. If you divide the larger male SD by the larger male mean for each morphology the effect is much smaller than tabulated in the second figure below.

Sex differences in human brain structure and function are of substantial scientific interest because of sex-differential susceptibility to psychiatric disorders and because of the potential to explain sex differences in psychological traits. Males are known to have larger brain volumes, though the patterns of differences across brain subregions have typically only been examined in small, inconsistent studies. In addition, despite common findings of greater male variability in traits like intelligence, personality, and physical performance, variance differences in the brain have received little attention. Here we report the largest single-sample study of structural and functional sex differences in the human brain to date (2,750 female and 2,466 male participants aged 44-77 years). Males had higher cortical and sub-cortical volumes, cortical surface areas, and white matter diffusion directionality; females had thicker cortices and higher white matter tract complexity. Considerable overlap between the distributions for males and females was common, and subregional differences were smaller after accounting for global differences. There was generally greater male variance across structural measures. The modestly higher male score on two cognitive tests was partly mediated via structural differences. Functional connectome organization showed stronger connectivity for males in unimodal sensorimotor cortices, and stronger connectivity for females in the default mode network. This large-scale characterisation of neurobiological sex differences provides a foundation for attempts to understand the causes of sex differences in brain structure and function, and their associated psychological and psychiatric consequences. 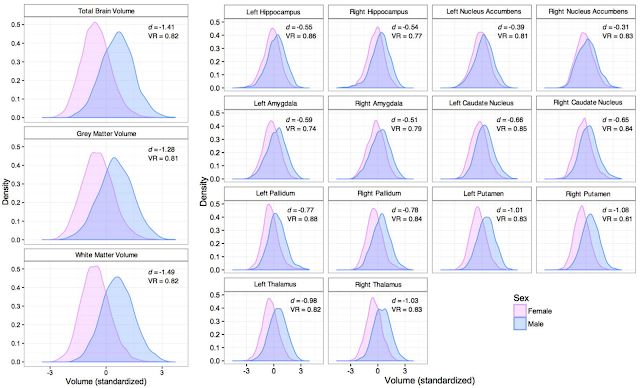 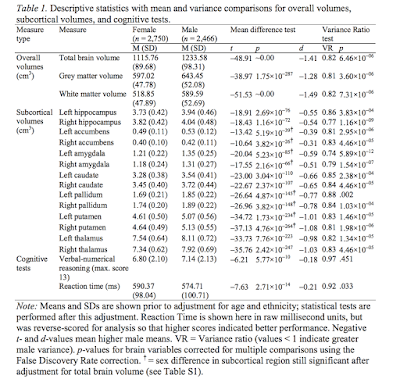