Management by the Unusually Competent 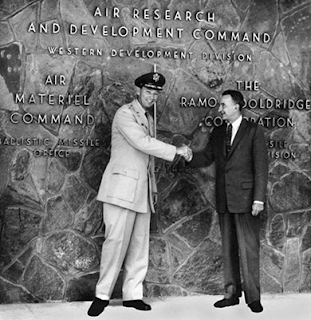 How did we get ICBMs? How did we get to the moon? What are systems engineering and systems management? Why do some large organizations make rapid progress, while others spin their wheels for decades at a time? Dominic Cummings addresses these questions in his latest essay.

Photo above of Schriever and Ramo. More Dom.


... In 1953, a relatively lowly US military officer Bernie Schriever heard von Neumann sketch how by 1960 the United States would be able to build a hydrogen bomb weighing less than a ton and exploding with the force of a megaton, about 80 times more powerful than Hiroshima. Schriever made an appointment to see von Neumann at the IAS in Princeton on 8 May 1953. As he waited in reception, he saw Einstein potter past. He talked for hours with von Neumann who convinced him that the hydrogen bomb would be progressively shrunk until it could fit on a missile. Schriever told Gardner about the discussion and 12 days later Gardner went to Princeton and had the same conversation with von Neumann. Gardner fixed the bureaucracy and created the Strategic Missiles Evaluation Committee. He persuaded von Neumann to chair it and it became known as ‘the Teapot committee’ or ‘the von Neumann committee’. The newly formed Ramo-Wooldridge company, which became Thompson-Ramo-Wooldridge (I’ll refer to it as TRW), was hired as the secretariat.

The Committee concluded (February 1954) that it would be possible to produce intercontinental ballistic missiles (ICBMs) by 1960 and deploy enough to deter the Soviets by 1962, that there should be a major crash programme to develop them, and that there was an urgent need for a new type of agency with a different management approach to control the project. Although intelligence was thin and patchy, von Neumann confidently predicted on technical and political grounds that the Soviet Union would engage in the same race. It was discovered years later that the race had already been underway partly driven by successful KGB operations. Von Neumann’s work on computer-aided air defence systems also meant he was aware of the possibilities for the Soviets to build effective defences against US bombers.

‘The nature of the task for this new agency requires that over-all technical direction be in the hands of an unusually competent group of scientists and engineers capable of making systems analyses, supervising the research phases, and completely controlling experimental and hardware phases of the program… It is clear that the operation of this new group must be relieved of excessive detailed regulation by existing government agencies.’ (vN Committee, emphasis added.)


A new committee, the ICBM Scientific Advisory Committee, was created and chaired by von Neumann so that eminent scientists could remain involved. One of the driving military characters, General Schriever, realised that people like von Neumann were an extremely unusual asset. He said later that ‘I became really a disciple of the scientists… I felt strongly that the scientists had a broader view and had more capabilities.’ Schriever moved to California and started setting up the new operation but had to deal with huge amounts of internal politics as the bureaucracy naturally resisted new ideas. The Defense Secretary, Wilson, himself opposed making ICBMs a crash priority.

... Almost everybody hated the arrangement. Even the Secretary of the Air Force (Talbott) tried to overrule Schriever and Ramo. It displaced the normal ‘prime contractor’ system in which one company, often an established airplane manufacturer, would direct the whole programme. Established businesses were naturally hostile. Traditional airplane manufacturers were run very much on Taylor’s principles with rigid routines. TRW employed top engineers who would not be organised on Taylor’s principles. Ramo, also a virtuoso violinist, had learned at Caltech the value of a firm grounding in physics and an interdisciplinary approach in engineering. He and his partner Wooridge had developed their ideas on systems engineering before starting their own company. The approach was vindicated quickly when TRW showed how to make the proposed Atlas missile much smaller and simpler therefore cheaper and faster to develop.

... According to Johnson, almost all the proponents of systems engineering had connections with either Caltech (where von Karman taught and JPL was born) or MIT (which was involved with the Radiation Lab and other military projects during World War 2). Bell Labs, which did R&D for AT&T, was also a very influential centre of thinking. The Jet Propulsion Laboratory (JPL) managed by Caltech also, under the pressure of repeated failure, independently developed systems management and configuration control. They became technical leaders in space vehicles. NASA, however, did not initially learn from JPL.

... Philip Morse, an MIT physicist who headed the Pentagon’s Weapons Systems Evaluation Group after the war, reflected on this resistance:


‘Administrators in general, even the high brass, have resigned themselves to letting the physical scientist putter around with odd ideas and carry out impractical experiments, as long as things experimented with are solutions or alloys or neutrons or cosmic rays. But when one or more start prying into the workings of his own smoothly running organization, asking him and others embarrassing questions not related to the problems he wants them to solve, then there’s hell to pay.’ (Morse, ‘Operations Research, What is It?’, Proceedings of the First Seminar in Operations Research, November 8–10, 1951.) 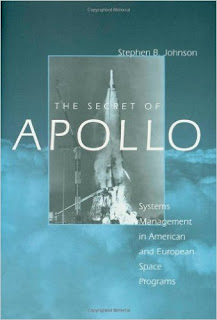 The Secret of Apollo: Systems Management in American and European Space Programs, Stephen B. Johnson.
Posted by Steve Hsu at 3:39 PM