Baby Universes in the Laboratory 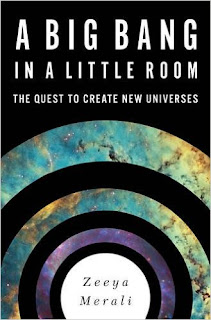 This was on the new books table at our local bookstore. I had almost forgotten about doing an interview and corresponding with the author some time ago. See also here and here.

The book is a well-written overview of some of the more theoretical aspects of inflationary cosmology, the big bang, the multiverse, etc. It also fleshes out some of the individual stories of the physicists involved in this research.


Kirkus Reviews: ... In her elegant and perceptive book, Merali ... unpacks the science behind what we know about our universe’s beginnings and traces the paths that many renowned researchers have taken to translate these insights to new heights: the creation of a brand-new “baby” universe, and not an empty one, either, but one with its own physics, matter, and (possibly) life. ... Among the most significant scientific advances in the last half-century is the discovery that our universe is inflating exponentially, a theory that led to many more breakthroughs in physics and cosmology. Yet the big question—how did the universe form, triggering inflation to begin with?—remains opaque. Merali, who works at the Foundational Questions Institute, which explores the boundaries of physics and cosmology, effortlessly explains the complex theories that form the bedrock of this concept, and she brings to life the investigators who have dedicated much of their careers in pursuit of fundamental truths. She also neatly incorporates discussions of philosophy and religion—after all, nothing less than grand design itself is at stake here—without any heavy-handedness or agenda. Over the course of several years, she traveled the world to interview firsthand the most important figures behind the idea of laboratory universe creation ... and the anecdotes she includes surrounding these conversations make her portrait even more compelling.

Here are two illustrations of how a baby universe pinches off from the universe in which it was created. This is all calculable within general relativity, modulo an issue with quantum smoothing of a singularity. The remnant of the baby universe appears to outside observers as a black hole. But inside one finds an exponentially growing region of spacetime.