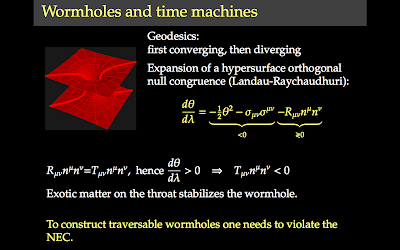 My kids have been reading lots of books over the break, including an adventure series that involves time travel. Knowing vaguely that dad is a theoretical physicist, they asked me how time travel works.

1. Can one change history by influencing past events?

2. Is there only one timeline that cannot be altered, even by time travel?

I told them that no one really knows the answer, or the true nature of time.

I gave them an example of 1 and of 2 from classic science fiction :-)


... Looking at the mud on his boots, Eckels finds a crushed butterfly, whose death has apparently set in motion a series of subtle changes that have affected the nature of the alternative present to which the safari has returned. ...

(Note this version implies the existence of alternative or parallel universes.)

2. Ted Chiang's one pager What's expected of us, which also notices that a single time line seems deterministic, and threatens Free Will. (More ;-)

Most people say that when they first try it, it feels like they're playing a strange game, one where the goal is to press the button after seeing the flash, and it's easy to play. But when you try to break the rules, you find that you can't. If you try to press the button without having seen a flash, the flash immediately appears, and no matter how fast you move, you never push the button until a second has elapsed. If you wait for the flash, intending to keep from pressing the button afterwards, the flash never appears. No matter what you do, the light always precedes the button press. There's no way to fool a Predictor.

The heart of each Predictor is a circuit with a negative time delay — it sends a signal back in time. The full implications of the technology will become apparent later, when negative delays of greater than a second are achieved, but that's not what this warning is about. The immediate problem is that Predictors demonstrate that there's no such thing as free will.

There have always been arguments showing that free will is an illusion, some based on hard physics, others based on pure logic. Most people agree these arguments are irrefutable, but no one ever really accepts the conclusion. The experience of having free will is too powerful for an argument to overrule. What it takes is a demonstration, and that's what a Predictor provides. ...

I attended a Methodist Sunday school as a kid. I asked my teacher: If God knows everything, does he know the outcomes of all the decisions I will ever make? Then will I ever make a free choice?

I also asked whether there are Neanderthals in heaven, but that's another story...
Posted by Steve Hsu at 5:58 PM