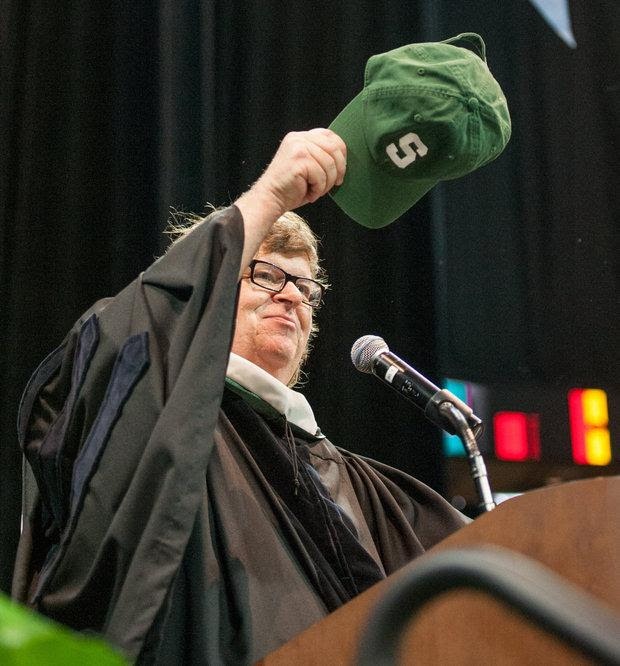 Michael Moore received an honorary degree from Michigan State University in December 2014. Said I to the packed Breslin Center: "President Simon, it is my honor to present Michael Moore for the degree Doctor of Humanities." :-)


michaelmoore.com: ... I am sorry to be the bearer of bad news, but I gave it to you straight last summer when I told you that Donald Trump would be the Republican nominee for president. And now I have even more awful, depressing news for you: Donald J. Trump is going to win in November. This wretched, ignorant, dangerous part-time clown and full time sociopath is going to be our next president. President Trump. Go ahead and say the words, ‘cause you’ll be saying them for the next four years: “PRESIDENT TRUMP.”

Never in my life have I wanted to be proven wrong more than I do right now.

I can see what you’re doing right now. You’re shaking your head wildly – “No, Mike, this won’t happen!” Unfortunately, you are living in a bubble that comes with an adjoining echo chamber where you and your friends are convinced the American people are not going to elect an idiot for president. You alternate between being appalled at him and laughing at him because of his latest crazy comment or his embarrassingly narcissistic stance on everything because everything is about him. And then you listen to Hillary and you behold our very first female president, someone the world respects, someone who is whip-smart and cares about kids, who will continue the Obama legacy because that is what the American people clearly want! Yes! Four more years of this!

You need to exit that bubble right now. You need to stop living in denial and face the truth which you know deep down is very, very real. Trying to soothe yourself with the facts – “77% of the electorate are women, people of color, young adults under 35 and Trump cant win a majority of any of them!” – or logic – “people aren’t going to vote for a buffoon or against their own best interests!” – is your brain’s way of trying to protect you from trauma. Like when you hear a loud noise on the street and you think, “oh, a tire just blew out,” or, “wow, who’s playing with firecrackers?” because you don’t want to think you just heard someone being shot with a gun. It’s the same reason why all the initial news and eyewitness reports on 9/11 said “a small plane accidentally flew into the World Trade Center.” We want to – we need to – hope for the best because, frankly, life is already a shit show and it’s hard enough struggling to get by from paycheck to paycheck. We can’t handle much more bad news. So our mental state goes to default when something scary is actually, truly happening. The first people plowed down by the truck in Nice spent their final moments on earth waving at the driver whom they thought had simply lost control of his truck, trying to tell him that he jumped the curb: “Watch out!,” they shouted. “There are people on the sidewalk!”

Well, folks, this isn’t an accident. It is happening. And if you believe Hillary Clinton is going to beat Trump with facts and smarts and logic, then you obviously missed the past year of 56 primaries and caucuses where 16 Republican candidates tried that and every kitchen sink they could throw at Trump and nothing could stop his juggernaut. As of today, as things stand now, I believe this is going to happen – and in order to deal with it, I need you first to acknowledge it ...

And therein lies the problem for November – who is going to have the most motivated, most inspired voters show up to vote? You know the answer to this question. Who’s the candidate with the most rabid supporters? Whose crazed fans are going to be up at 5 AM on Election Day, kicking ass all day long, all the way until the last polling place has closed, making sure every Tom, Dick and Harry (and Bob and Joe and Billy Bob and Billy Joe and Billy Bob Joe) has cast his ballot? That’s right. That’s the high level of danger we’re in. And don’t fool yourself — no amount of compelling Hillary TV ads, or outfacting him in the debates or Libertarians siphoning votes away from Trump is going to stop his mojo.

Here are the 5 reasons Trump is going to win:

1. Midwest Math, or Welcome to Our Rust Belt Brexit. I believe Trump is going to focus much of his attention on the four blue states in the rustbelt of the upper Great Lakes – Michigan, Ohio, Pennsylvania and Wisconsin. Four traditionally Democratic states – but each of them have elected a Republican governor since 2010 (only Pennsylvania has now finally elected a Democrat). In the Michigan primary in March, more Michiganders came out to vote for the Republicans (1.32 million) that the Democrats (1.19 million). Trump is ahead of Hillary in the latest polls in Pennsylvania and tied with her in Ohio. Tied? How can the race be this close after everything Trump has said and done? Well maybe it’s because he’s said (correctly) that the Clintons’ support of NAFTA helped to destroy the industrial states of the Upper Midwest. Trump is going to hammer Clinton on this and her support of TPP and other trade policies that have royally screwed the people of these four states. When Trump stood in the shadow of a Ford Motor factory during the Michigan primary, he threatened the corporation that if they did indeed go ahead with their planned closure of that factory and move it to Mexico, he would slap a 35% tariff on any Mexican-built cars shipped back to the United States. It was sweet, sweet music to the ears of the working class of Michigan, and when he tossed in his threat to Apple that he would force them to stop making their iPhones in China and build them here in America, well, hearts swooned and Trump walked away with a big victory that should have gone to the governor next-door, John Kasich.

From Green Bay to Pittsburgh, this, my friends, is the middle of England – broken, depressed, struggling, the smokestacks strewn across the countryside with the carcass of what we use to call the Middle Class. Angry, embittered working (and nonworking) people who were lied to by the trickle-down of Reagan and abandoned by Democrats who still try to talk a good line but are really just looking forward to rub one out with a lobbyist from Goldman Sachs who’ll write them nice big check before leaving the room. What happened in the UK with Brexit is going to happen here. ...

2. The Last Stand of the Angry White Man ... a small peek into the mind of the Endangered White Male. There is a sense that the power has slipped out of their hands, that their way of doing things is no longer how things are done. This monster, the “Feminazi,”the thing that as Trump says, “bleeds through her eyes or wherever she bleeds,” has conquered us — and now, after having had to endure eight years of a black man telling us what to do, we’re supposed to just sit back and take eight years of a woman bossing us around? After that it’ll be eight years of the gays in the White House! Then the transgenders! You can see where this is going. By then animals will have been granted human rights and a fuckin’ hamster is going to be running the country. This has to stop!

3. The Hillary Problem ... her vote for the Iraq War made me promise her that I would never vote for her again. ... Let’s face it: Our biggest problem here isn’t Trump – it’s Hillary. She is hugely unpopular — nearly 70% of all voters think she is untrustworthy and dishonest. She represents the old way of politics, not really believing in anything other than what can get you elected. That’s why she fights against gays getting married one moment, and the next she’s officiating a gay marriage. Young women are among her biggest detractors, which has to hurt ...

4. The Depressed Sanders Vote. ... The fire alarm that should be going off is that while the average Bernie backer will drag him/herself to the polls that day to somewhat reluctantly vote for Hillary, it will be what’s called a “depressed vote” – meaning the voter doesn’t bring five people to vote with her. He doesn’t volunteer 10 hours in the month leading up to the election. She never talks in an excited voice when asked why she’s voting for Hillary. A depressed voter. Because, when you’re young, you have zero tolerance for phonies and BS. Returning to the Clinton/Bush era for them is like suddenly having to pay for music, or using MySpace or carrying around one of those big-ass portable phones. They’re not going to vote for Trump; some will vote third party, but many will just stay home.

5. The Jesse Ventura Effect. ... the voting booth. It’s one of the few places left in society where there are no security cameras, no listening devices, no spouses, no kids, no boss, no cops, there’s not even a friggin’ time limit. You can take as long as you need in there and no one can make you do anything. ... There are no rules. And because of that, and the anger that so many have toward a broken political system, millions are going to vote for Trump not because they agree with him, not because they like his bigotry or ego, but just because they can. ...

Email ThisBlogThis!Share to TwitterShare to FacebookShare to Pinterest
Labels: politics