A recent paper by Hawking, Perry, and Strominger (Soft Hair on Black Holes) proposes a new kind of soft hair (i.e., soft gravitons or photons) on the black hole horizon. This hair is related to recent results on BMS symmetries and soft (zero) modes by Strominger and collaborators. The existence of an infinite number of additional symmetries and conserved charges in gravity (which can be measured using the gravitational memory results of Braginsky and Thorne) is uncontroversial. The subtle question (discussed by Jacques Distler and Lubos Motl) is whether one can think of black holes as carrying these charges, or whether they are only a property of the asymptotic vacuum of Minkowski space. (I suppose that the fact that one can measure these charges for a localized gravitational wave suggests that they are not just due to choice of boundary conditions at null infinity.) 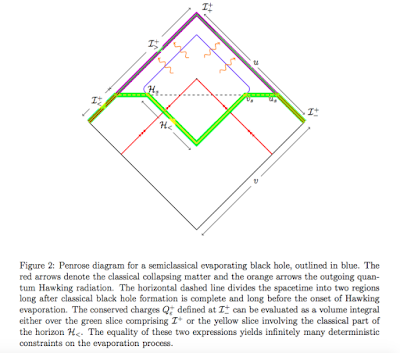 I found this talk (video below) by Malcolm Perry to be a very pedagogical introduction to BMS symmetries. If I understood correctly, the infinite number of gravitational vacuum states can be thought of as a choice of boundary condition on perturbations to the Minkowski metric (i.e., on gravitational radiation at infinity). The BH horizon also has a BMS symmetry and one can think of the arbitrary choice of function there as a condition on the outgoing Hawking radiation (i.e., soft photons or gravitons) -- see @50min in the video. Perry claims (rather quickly) that one could measure the charges on / near the horizon using methods analogous to Braginsky and Thorne (i.e., inertial detectors). If this is true then it seems reasonable to think of the charges as actually having something to do with the horizon. That is, there are many more "types" of soft radiation coming out of the BH than originally thought -- the radiation can carry not just M, Q, J, but an infinite number of quantum numbers.

I admit to still being confused about this, but it is clear that Perry et al. have thought specifically about it. Whether this helps solve the BH information puzzle is not clear to me at the moment, but it does raise many issues.

Two talks by Strominger on BMS, soft modes, and memory. The first is longer and includes quite a lot of discussion. The second is at Strings 2015 and is more polished / compressed.