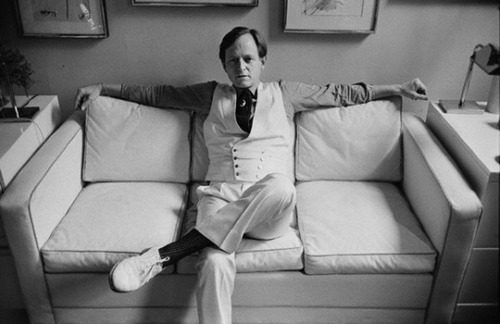 Mau-Mauing the Flak Catchers, by Tom Wolfe. First appeared in Cosmopolitan magazine, April 1971. (The Sixties lasted well into the Seventies!) Collected, together with Radical Chic, in this Farrar, Straus and Giroux edition (2009).


Tom Wolfe understands the human animal like no sociologist around. He tweaks his reader's every buried thought and prejudice. He sees through everything. He is as original and outrageous as ever.  ―The New York Times.

Wolfe describes hapless bureaucrats (the Flak Catchers) whose function was reduced to taking abuse, or "mau-mauing" (in reference to the intimidation tactics employed in Kenya's anti-colonial Mau Mau Uprising)...  ―Wikipedia.


Wolfe: ... If you were outrageous enough ... you could shake up the bureaucrats so bad that their eyes froze into iceballs and their mouths twisted up into smiles of sheer physical panic, into shit-eating grins, so to speak ...

... Nobody kept records on the confrontations, which is too bad. There must have been hundreds of them in San Francisco alone. Across the country there must have been thousands. When the confrontations touched the white middle class in a big way, like when black students started strikes and disruptions at San Francisco State, Columbia, Cornell, or Yale, ... -- then the media described it blow by blow. But what went on in the colleges and churches was just a part of it. ...

... The whites' physical fear of the Chinese was nearly zero. The white man pictured the Chinese as small, quiet, restrained little fellows. He had a certain deep-down voodoo fear of their powers of Evil in the Dark ... the Hatchet Men ... the Fangs of the Tong ... but it wasn't a live fear. For that matter, the young Chinese themselves weren't ready for the age of mau-mauing. It wasn't that they feared the white man, the way black people had. It was more that they didn't fear or resent white people enough. They looked down on whites as childish and uncultivated. They also found it somewhat shameful to present themselves as poor and oppressed, on the same level with Negroes and Mexican-Americans.