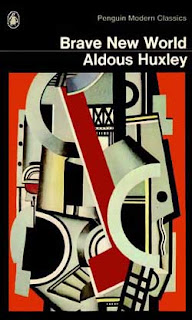 "Alpha children wear grey. They work much harder than we do, because they're so frightfully clever. I'm really awfuly glad I'm a Beta, because I don't work so hard. And then we are much better than the Gammas and Deltas. ..."

Brave New World was written in 1932. In 1958 Huxley reconsidered his dystopian novel in a long essay.

In the Brave New World of my fantasy eugenics and dysgenics were practiced systematically. In one set of bottles biologically superior ova, fertilized by biologi­cally superior sperm, were given the best possible pre­natal treatment and were finally decanted as Betas, Alphas and even Alpha Pluses. In another, much more numerous set of bottles, biologically inferior ova, ferti­lized by biologically inferior sperm, ... [t]he creatures finally decanted were almost subhuman; but they were capa­ble of performing unskilled work and, when properly conditioned, detensioned by free and frequent access to the opposite sex, constantly distracted by gratuitous entertainment and reinforced in their good behavior patterns by daily doses of soma, could be counted on to give no trouble to their superiors.

In this second half of the twentieth century we do nothing systematic about our breeding; but in our random and unregulated way we are not only over-populating our planet, we are also, it would seem, mak­ing sure that these greater numbers shall be of biologically poorer quality. ... And along with a decline of average healthiness there may well go a decline in average intelligence. Indeed, some competent authorities are convinced that such a decline has already taken place and is continuing. "Un­der conditions that are both soft and unregulated," writes Dr. W. H. Sheldon, "our best stock tends to be outbred by stock that is inferior to it in every respect. . . . It is the fashion in some academic circles to assure students that the alarm over differential birth­rates is unfounded; that these problems are merely economic, or merely educational, or merely religious, or merely cultural or something of the sort. This is Pollyanna optimism. Reproductive delinquency is biologi­cal and basic." And he adds that "nobody knows just how far the average IQ in this country [the U.S.A.] has declined since 1916, when Terman attempted to standardize the meaning of IQ 100."

... And now let us consider the case of the rich, industrialized and democratic society, in which, owing to the random but effective practice of dysgenics, IQ's and physical vigor are on the decline. For how long can such a society maintain its traditions of individual liberty and democratic government? Fifty or a hundred years from now our children will learn the answer to this question.

... And what about the congenitally insufficient organ­isms, whom our medicine and our social services now preserve so that they may propagate their kind? To help the unfortunate is obviously good. But the whole­sale transmission to our descendants of the results of unfavorable mutations, and the progressive contamina­tion of the genetic pool from which the members of our species will have to draw, are no less obviously bad. We are on the horns of an ethical dilemma, and to find the middle way will require all our intelligence and all our good will.