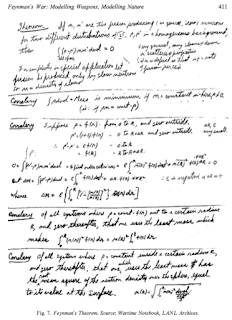 Radar and nuclear weapons could not have been developed without the big brains.

What do I mean by understanding? Nothing deep or accurate—just to be able to see some of the qualitative consequences of the equations by some method other than solving them in detail. -- Feynman to Welton, 10 February 1947.


... The fundamental problem facing theorists on the bomb project was this: in a limited time, they had to produce accurate, quantitative predictions of the efficiency and critical mass of the chain reaction in a wide variety of geometries. There was no time to devise detailed models for each configuration of fissile material and neutron-reflecting tampers, just as on the radar project physicists could not start calculating ab initio for each new arrangement of waveguides and junctions. At MIT, the radar physicists [ e.g., Julian Schwinger ] had to provide effective circuits for the various waveguides so the radio engineers could manipulate them. Similarly, for the Los Alamos physicists facing engineers, architects, and experimentalists, much rode on the theorists’ ability to modularise aspects of their work so it could be passed to non-theorists. They had to figure out ways of characterising the ‘neutronics’ using certain building blocks—whether those building blocks were standardised effective amplifiers or new theoretical techniques to model neutron diffusion.

Feynman learned from and contributed to this culture of modularity. Whether he was grappling with the human efficiency of crunching numbers using Marchant calculators, or inventing easily taught rules for tracking neutrons in tampers, Feynman developed highly movable theoretical modules. These simple, often visualisable mechanisms took complex human, physical and calculational configurations and sorted them into simpler parts that could be recombined in a myriad of ways to calculate rapid, approximate, yet reliable answers. It was a kind of theory particularly appropriate to the constantly rearranged devices they were to represent. ...

Note Feynman seems to spell Corollary as Coralary repeatedly. In other notebooks he often spelled gauge (as in gauge theory) as guage. These are commonly used words in physics. I always suspected that, as far as such constructs are well-defined, Feynman's mathematical ability was superior to his verbal ability. See Feynman's Cognitive Style.
Posted by Steve Hsu at 2:21 AM