Where men are men, and giants walk the earth


Thought experiment for physicists: imagine a professor throwing copies of Jackson's Classical Electrodynamics at a group of students with the order, "Work out the last problem in each chapter and hand in your solutions to me on Monday!" I suspect that this exercise produces a highly useful rank ordering within the group, with huge differences in number of correct solutions.

In response, a Caltech friend of mine (Page '87, MIT PhD in Physics) sent this old article from the Caltech News. It describes Professor William Smythe and his infamous course on electromagnetism, which was designed to "weed out weaklings"! The article lists six students who survived Smythe's course and went on to win the Nobel prize in Physics. (Click for larger version.)

Vernon Smith, a "weakling" who deliberately avoided the course, went on to win a Nobel prize in Economics. Smith wrote


The first thing to which one has to adapt is the fact that no matter how high people might sample in the right tail of the distribution for "intelligence," ... that sample is still normally distributed in performing on the materials in the Caltech curriculum.

I remind the reader of the Page House motto: Where men are men, and giants walk the earth :-) 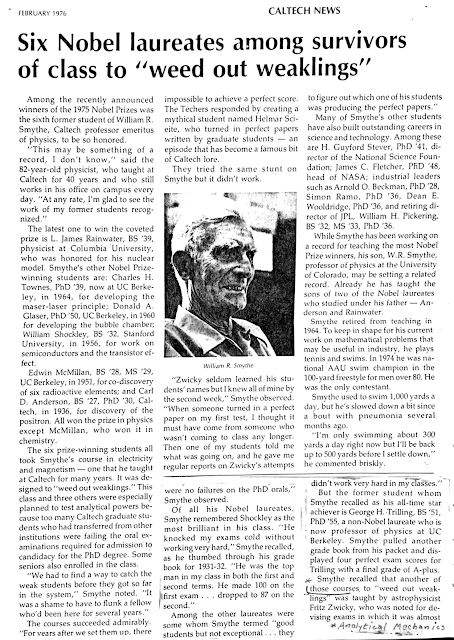 Note added: The article mentions George Trilling, a professor at Berkeley I knew in graduate school. I once wrote an electrodynamics solution set for him, and was surprised that he had the temerity to complain about one of my solutions 8-)
Posted by Steve Hsu at 6:22 PM