These recent Nature Genetics papers offer more evidence that group differences in a complex polygenic trait (height), governed by thousands of causal variants, can arise over a relatively short time (~ 10k years) as a result of natural selection (differential response to varying local conditions). One can reach this conclusion well before most of the causal variants have been accounted for, because the frequency differences are found across many variants (natural selection affects all of them). Note the first sentence above contradicts many silly things (drift over selection, genetic uniformity of all human subpopulations due to insufficient time for selection, etc.) asserted by supposed experts on evolution, genetics, human biology, etc. over the last 50+ years. The science of human evolution has progressed remarkably in just the last 5 years, thanks mainly to advances in genomic technology.

Cognitive ability is similar to height in many respects, so this type of analysis should be possible in the near future. 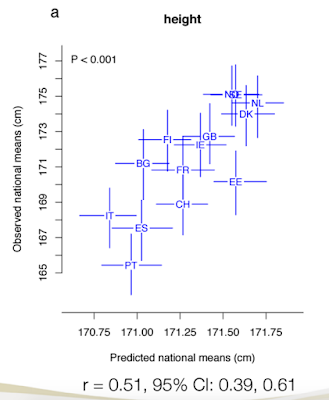 Height-reducing variants and selection for short stature in Sardinia

We report sequencing-based whole-genome association analyses to evaluate the impact of rare and founder variants on stature in 6,307 individuals on the island of Sardinia. We identify two variants with large effects. One variant, which introduces a stop codon in the GHR gene, is relatively frequent in Sardinia (0.87% versus <0.01% elsewhere) and in the homozygous state causes Laron syndrome involving short stature. We find that this variant reduces height in heterozygotes by an average of 4.2 cm (−0.64 s.d.). The other variant, in the imprinted KCNQ1 gene (minor allele frequency (MAF) = 7.7% in Sardinia versus <1% elsewhere) reduces height by an average of 1.83 cm (−0.31 s.d.) when maternally inherited. Additionally, polygenic scores indicate that known height-decreasing alleles are at systematically higher frequencies in Sardinians than would be expected by genetic drift. The findings are consistent with selection for shorter stature in Sardinia and a suggestive human example of the proposed 'island effect' reducing the size of large mammals. 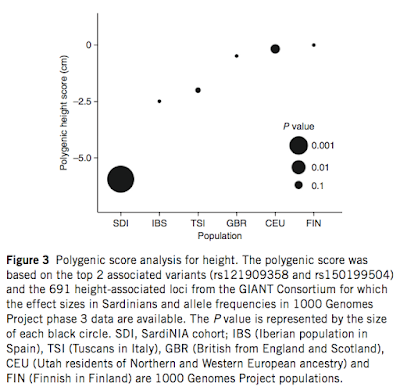