Neoreaction and the Dark Enlightenment

An essay on neoreaction and the dark enlightenment from The Awl.

See also Fukuyama and Zhang on the China Model , Is there a China model? and Power and paranoia in Silicon Valley.


The Darkness Before the Right

A right-wing politics for the coming century is taking shape. And it’s not slowing down.

... Land’s case for democratic dysfunction is simply stated. Democracy is structurally incapable of rational leadership due to perverse incentive structures. It is trapped in short-termism by the electoral cycle, hard decisions become political suicide, and social catastrophe is acceptable as long as it can be blamed on the other team. Moreover, inter-party competition to “buy votes” leads to a ratchet effect of ever-greater state intervention in the economy—and even if this is periodically reversed, in the long-run it only moves in one direction. ... Rather than accept creeping democratic socialism (which leads to “zombie apocalypse”), Land would prefer to simply abolish democracy and appoint a national CEO. This capitalist Leviathan would be, at a bare minimum, capable of rational long-term planning and aligning individual incentive structures with social well-being (CEO-as-Tiger-Mom). Individuals would have no say in government, but would be generally left alone, and free to leave. This right of “exit” is, for Land, the only meaningful right, and it’s opposed to democratic “voice,” where everyone gets a say, but is bound by the decisions of the majority—the fear being that the majority will decide to self-immolate.

Anti-democratic sentiment is uncommon in the West, so Land’s conclusions appear as shocking, deliberate provocations, which they partly are. ... Pointing to Singapore, Hong Kong, and Shanghai, it argues that economically and socially effective government legitimizes itself, with no need for elections. And this view isn’t limited to the internet right. ...

This brand of authoritarian capitalism has a certain fascist sheen, but in truth it’s closer to a rigidly formalized capitalist technocracy. There’s no mass mobilization, totalitarian social reorganization, or cult of violence here; governing will be done by the governors, and popular sovereignty replaced by the market Mandate of Heaven. There is a strange sort of disillusioned cultural conservatism here as well, albeit one absolutely stripped of moralism. In fact, what’s genuinely creepy about it is the near-sociopathic lack of emotional attachment; it’s a sort of pure incentive-based functionalism, as if from the perspective of a computer or alien. If a person doesn’t produce quantifiable value, they are, objectively, not valuable. Everything else is sentimentality.

Capitalism, in this view, is less something we do than something done to us. Contra business-class bromides about the market as the site of creative expression, for Land, as for Marx, capitalism is a fundamentally alien institution in which “the means of production socially impose themselves as an effective imperative.” This means simply that the competitive dynamics of capitalism drive technical progress as an iron law. If one capitalist doesn’t want to build smarter, better machines, he’ll be out-competed by one who does. If Apple doesn’t make you an asshole, Google will. If America doesn’t breed genetically modified super-babies, China will. The market doesn’t run on “greed,” or any intentionality at all. Its beauty—or horror—is its impersonality. Either you adapt, or you die.

Accelerating technological growth, then, is written into capitalism’s DNA. Smart machines make us smarter allowing us to make smarter machines, in a positive feedback loop that quickly begins to approach infinity, better known in this context as “singularity.” ...

Somehow I ended up on this "map of neoreaction" -- without my consent, of course. Who are all these people? ;-) 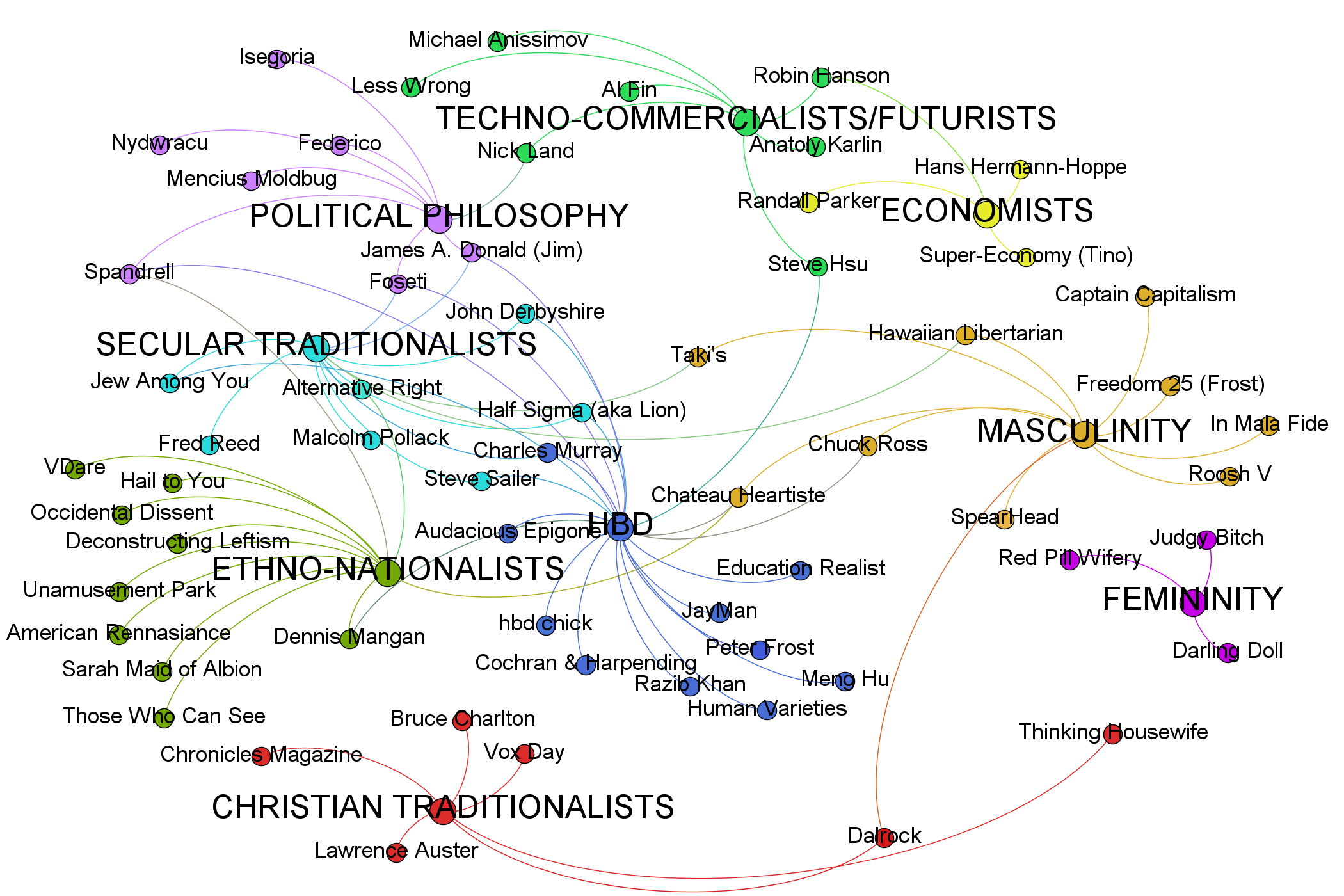