Don’t Worry, Smart Machines Will Take Us With Them: Why human intelligence and AI will co-evolve.

I hope you enjoy my essay in the new issue of the science magazine Nautilus (theme: the year 2050), which discusses the co-evolution of humans and machines as we advance in both AI and genetic technologies. My Nautilus article from 2014: Super-Intelligent Humans Are Coming.


Nautilus: ... AI can be thought of as a search problem over an effectively infinite, high-dimensional landscape of possible programs. Nature solved this search problem by brute force, effectively performing a huge computation involving trillions of evolving agents of varying information processing capability in a complex environment (the Earth). It took billions of years to go from the first tiny DNA replicators to Homo Sapiens. What evolution accomplished required tremendous resources. While silicon-based technologies are increasingly capable of simulating a mammalian or even human brain, we have little idea of how to find the tiny subset of all possible programs running on this hardware that would exhibit intelligent behavior.

But there is hope. By 2050, there will be another rapidly evolving and advancing intelligence besides that of machines: our own. The cost to sequence a human genome has fallen below $1,000, and powerful methods have been developed to unravel the genetic architecture of complex traits such as human cognitive ability. Technologies already exist which allow genomic selection of embryos during in vitro fertilization—an embryo’s DNA can be sequenced from a single extracted cell. Recent advances such as CRISPR allow highly targeted editing of genomes, and will eventually find their uses in human reproduction.

... These two threads—smarter people and smarter machines—will inevitably intersect. Just as machines will be much smarter in 2050, we can expect that the humans who design, build, and program them will also be smarter. Naively, one would expect the rate of advance of machine intelligence to outstrip that of biological intelligence. Tinkering with a machine seems easier than modifying a living species, one generation at a time. But advances in genomics—both in our ability to relate complex traits to the underlying genetic codes, and the ability to make direct edits to genomes—will allow rapid advances in biologically-based cognition. Also, once machines reach human levels of intelligence, our ability to tinker starts to be limited by ethical considerations. Rebooting an operating system is one thing, but what about a sentient being with memories and a sense of free will?

... AI research also pushes even very bright humans to their limits. The frontier machine intelligence architecture of the moment uses deep neural nets: multilayered networks of simulated neurons inspired by their biological counterparts. Silicon brains of this kind, running on huge clusters of GPUs (graphical processor units made cheap by research and development and economies of scale in the video game industry), have recently surpassed human performance on a number of narrowly defined tasks, such as image or character recognition. We are learning how to tune deep neural nets using large samples of training data, but the resulting structures are mysterious to us. The theoretical basis for this work is still primitive, and it remains largely an empirical black art. The neural networks researcher and physicist Michael Nielsen puts it this way:


... in neural networks there are large numbers of parameters and hyper-parameters, and extremely complex interactions between them. In such extraordinarily complex systems it’s exceedingly difficult to establish reliable general statements. Understanding neural networks in their full generality is a problem that, like quantum foundations, tests the limits of the human mind.

... It may seem incredible, or even disturbing, to predict that ordinary humans will lose touch with the most consequential developments on planet Earth, developments that determine the ultimate fate of our civilization and species. Yet consider the early 20th-century development of quantum mechanics. The first physicists studying quantum mechanics in Berlin—men like Albert Einstein and Max Planck—worried that human minds might not be capable of understanding the physics of the atomic realm. Today, no more than a fraction of a percent of the population has a good understanding of quantum physics, although it underlies many of our most important technologies: Some have estimated that 10-30 percent of modern gross domestic product is based on quantum mechanics. In the same way, ordinary humans of the future will come to accept machine intelligence as everyday technological magic, like the flat screen TV or smartphone, but with no deeper understanding of how it is possible.

New gods will arise, as mysterious and familiar as the old. 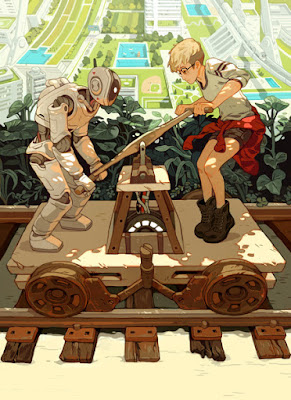