This Quartz article describes Jonathan Wai's research on the rate at which different universities produce alumni who make great contributions to science, technology, medicine, and mathematics. I think the most striking result is the range of outcomes: the top school outperforms good state flagships (R1 universities) by as much as a thousand times. In my opinion the main causative factor is simply filtering by cognitive ability and other personality traits like drive. Psychometrics works!


Quartz: Few individuals will be remembered in history for discovering a new law of nature, revolutionizing a new technology or captivating the world with their ideas. But perhaps these contributions say more about the impact of a university or college than test scores and future earnings. Which universities are most likely to produce individuals with lasting effect on our world?

The US News college rankings emphasize subjective reputation, student retention, selectivity, graduation rate, faculty and financial resources and alumni giving. Recently, other rankings have proliferated, including some based on objective long-term metrics such as individual earning potential. Yet, we know of no evaluations of colleges based on lasting contributions to society. Of course, such contributions are difficult to judge. In the analysis below, we focus primarily on STEM (science, technology, engineering and medicine/mathematics) contributions, which are arguably the least subjective to evaluate, and increasingly more valued in today’s workforce.

We examined six groups of exceptional achievers divided into two tiers, looking only at winners who attended college in the US. Our goal is to create a ranking among US colleges, but of course one could broaden the analysis if desired. The first level included all winners of the Nobel Prize (physics, chemistry, medicine, economics, literature, and peace), Fields Medal (mathematics) and the Turing Award (computer science). The second level included individuals elected to the National Academy of Sciences (NAS), National Academy of Engineering (NAE) or Institute of Medicine (IOM). The National Academies are representative of the top few thousand individuals in all of STEM.

We then traced each of these individuals back to their undergraduate days, creating two lists to examine whether the same or different schools rose to the top. We wanted to compare results across these two lists to see if findings in the first tier of achievement replicated in the second tier of achievement and to increase sample size to avoid the problem of statistical flukes.

Simply counting up the number of awards likely favors larger schools and alumni populations. We corrected for this by computing a per capita rate of production, dividing the number of winners from a given university by an estimate of the relative size of the alumni population. Specifically, we used the total number of graduates over the period 1966-2013 (an alternative method of estimating base population over 100 to 150 years led to very similar lists). This allowed us to objectively compare newer and smaller schools with older and larger schools.

In order to reduce statistical noise, we eliminated schools with only one or two winners of the Nobel, Fields or Turing prize. This resulted in only 25 schools remaining, which are shown below ... 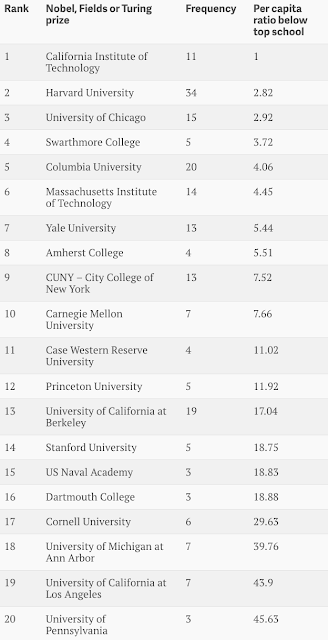 The vast majority of schools have never produced a winner. #114 Ohio State and #115 Penn State, which have highly ranked research programs in many disciplines, have each produced one winner. Despite being top tier research universities, their per capita rate of production is over 400 times lower than that of the highest ranked school, Caltech. Of course, our ranking doesn’t capture all the ways individuals can impact the world. However, achievements in the Nobel categories, plus math and computer science, are of great importance and have helped shaped the modern world.

As a replication check with a larger sample, we move to the second category of achievement: National Academy of Science, Engineering, or Medicine membership. The National Academies originated in an Act of Congress, signed by President Abraham Lincoln in 1863. Lifetime membership is conferred through a rigorous election process and is considered one of the highest honors a researcher can receive. 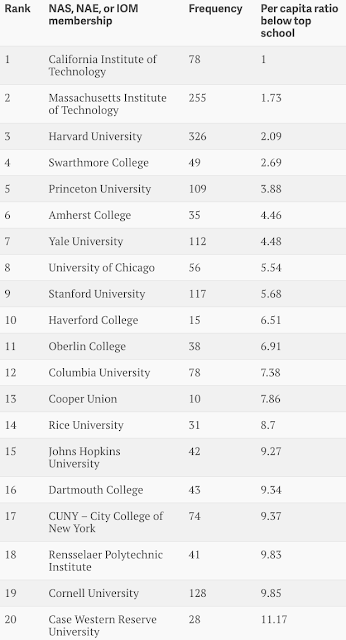 The results are strikingly similar across the two lists. If we had included schools with two winners in the Nobel/Fields/Turing list, Haverford, Oberlin, Rice, and Johns Hopkins would have been in the top 25 on both. For comparison, very good research universities such as #394 Arizona State, #396 Florida State and #411 University of Georgia are outperformed by the top school (Caltech) by 600 to 900 times. To give a sense of the full range: the per capita rate of production of top school to bottom school was about 449 to one for the Nobel/Fields/Turing list and 1788 to one for the National Academies list. These lists include only schools that produced at least one winner—the majority of colleges have produced zero.

What causes these drastically different odds ratios across a wide variety of leading schools? The top schools on our lists tend to be private, with significant financial resources. However, the top public university, UC Berkeley, is ranked highly on both lists: #13 on the Nobel/Fields/Turing and #31 on the National Academies. Perhaps surprisingly, many elite liberal arts colleges, even those not focused on STEM education, such as Swarthmore and Amherst, rose to the top. One could argue that the playing field here is fairly even: accomplished students at Ohio State, Penn State, Arizona State, Florida State and University of Georgia, which lag the leaders by factors of hundreds or almost a thousand, are likely to end up at the same highly ranked graduate programs as individuals who attended top schools on our list. It seems reasonable to conclude that large differences in concentration or density of highly able students are at least partly responsible for these differences in outcome.

Sports fans are unlikely to be surprised by our results. Among all college athletes only a few will win professional or world championships. Some collegiate programs undoubtedly produce champions at a rate far in excess of others. It would be uncontroversial to attribute this differential rate of production both to differences in ability of recruited athletes as well as the impact of coaching and preparation during college. Just as Harvard has a far higher percentage of students scoring 1600 on the SAT than most schools and provides advanced courses suited to those individuals, Alabama may have more freshman defensive ends who can run the forty yard dash in under 4.6 seconds, and the coaches who can prepare them for the NFL.

One intriguing result is the strong correlation (r ~ 0.5) between our ranking (over all universities) and the average SAT score of each student population, which suggests that cognitive ability, as measured by standardized tests, likely has something to do with great contributions later in life. By selecting heavily on measurable characteristics such as cognitive ability, an institution obtains a student body with a much higher likelihood of achievement. The identification of ability here is probably not primarily due to “holistic review” by admissions committees: Caltech is famously numbers-driven in its selection (it has the highest SAT/ACT scores), and outperforms the other top schools by a sizeable margin. While admission to one of the colleges on the lists above is no guarantee of important achievements later in life, the probability is much higher for these select matriculants.

We cannot say whether outstanding achievement should be attributed to the personal traits of the individual which unlocked the door to admission, the education and experiences obtained at the school, or benefits from alumni networks and reputation. These are questions worthy of continued investigation. Our findings identify schools that excel at producing impact, and our method introduces a new way of thinking about and evaluating what makes a college or university great. Perhaps college rankings should be less subjective and more focused on objective real world achievements of graduates.

For analogous results in college football, see here, here and here. Four and Five star recruits almost always end up at the powerhouse programs, and they are 100x to 1000x more likely to make it as pros than lightly recruited athletes who are nevertheless offered college scholarships.
Posted by Steve Hsu at 10:48 AM