Bourdieu and the Economy of Symbolic Exchange 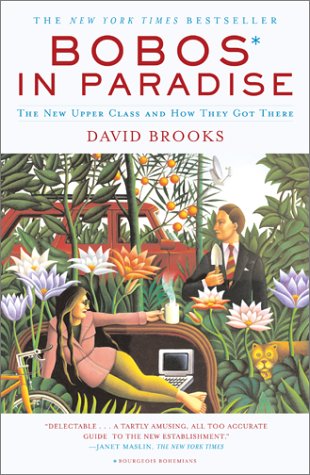 From Bobos in Paradise by David Brooks. This part of Bourdieu's oeuvre is, of course, required reading for all academics. By academics, I don't just mean humanists and social scientists. Even those in the hardest of sciences and technology would benefit from considering the political / symbolic economy of their field. Why, exactly, did most positions in top theoretical physics groups go to string theorists over a 20+ year period? See String Theory Quotes , String Theory and All That , Voting and Weighing.


The Economy of Symbolic Exchange

If a university were to offer a course of study on the marketplace of ideas, the writer who would be at the heart of the curriculum would be Pierre Bourdieu. Bourdieu is a French sociologist who is influential among his colleagues but almost entirely unread outside academia because of his atrocious prose style. Bourdieu’s aim is to develop an economy of symbolic exchanges, to delineate the rules and patterns of the cultural and intellectual marketplace. His basic thesis is that all intellectual and cultural players enter the marketplace with certain forms of capital. They may have academic capital (the right degrees), cultural capital (knowledge of a field or art form, a feel for the proper etiquette), linguistic capital (the ability to use language), political capital (the approved positions or affiliations), or symbolic capital (a famous fellowship or award). Intellectuals spend their careers trying to augment their capital and convert one form of capital into another. One intellectual might try to convert knowledge into a lucrative job; another might convert symbolic capital into invitations to exclusive conferences at tony locales; a third might seek to use linguistic ability to destroy the reputations of colleagues so as to become famous or at least controversial.

Ultimately, Bourdieu writes, intellectuals compete to gain a monopoly over the power to consecrate. Certain people and institutions at the top of each specialty have the power to confer prestige and honor on favored individuals, subjects, and styles of discourse. Those who hold this consecration of power influence taste, favor certain methodologies, and define the boundary of their discipline. To be chief consecrator is the intellectual’s dream.

Bourdieu doesn’t just look at the position an intellectual may hold at a given moment; he looks at the trajectory of a career, the successive attitudes, positions, and strategies a thinker adopts while rising or competing in the marketplace. A young intellectual may enter the world armed only with personal convictions. He or she will be confronted, Bourdieu says, with a diverse “field.” There will be daring radical magazines over on one side, staid establishment journals on another, dull but worthy publishing houses here, vanguard but underfunded houses over there. The intellectual will be confronted with rivalries between schools and between established figures. The complex relationships between these and other players in the field will be the tricky and shifting environment in which the intellectual will try to make his or her name. Bourdieu is quite rigorous about the interplay of these forces, drawing elaborate charts of the various fields of French intellectual life, indicating the power and prestige levels of each institution. He identifies which institutions have consecration power over which sections of the field.

Young intellectuals will have to know how to invest their capital to derive maximum “profit,” and they will have to devise strategies for ascent—whom to kiss up to and whom to criticize and climb over. Bourdieu’s books detail a dazzling array of strategies intellectuals use to get ahead. Bourdieu is not saying that the symbolic field can be understood strictly by economic principles. Often, he says, the “loser wins” rule applies. Those who most vociferously and publicly renounce material success win prestige and honor that can be converted into lucre. Nor does Bourdieu even claim that all of the strategies are self-conscious. He says that each intellectual possesses a “habitus,” or personality and disposition, that leads him or her in certain directions and toward certain fields. Moreover, the intellectual will be influenced, often unwillingly or unknowingly, by the gravitational pull of the rivalries and controversies of the field. Jobs will open up, grants will appear, furies will rage. In some ways the field dominates and the intellectuals are blown about within it.

Bourdieu hasn’t quite established himself as the Adam Smith of the symbolic economy. And it probably wouldn’t be very useful for a young intellectual to read him in hopes of picking up career tips, as a sort of Machiavellian Guide for Nobel Prize Wannabes. Rather, Bourdieu is most useful because he puts into prose some of the concepts that most other intellectuals have observed but have not systematized. Intellectual life is a mixture of careerism and altruism (like most other professions). Today the Bobo intellectual reconciles the quest for knowledge with the quest for the summer house.


Steve: We are living through a very bad time in particle theory. Without significant experimental guidance all we are left with is speculation and social dynamics driving the field. I hope things will get better when LHC data starts coming in - at least, most of the models currrently under consideration will be ruled out (although, of course, not string theory :-)

I will probably write a post at some point about how scientific fields which run through fallow experimental periods longer than 20 years (the length of a person's academic career) are in danger of falling into the traps which beset the humanities and social sciences. These were all discussed by Bourdieu long ago.