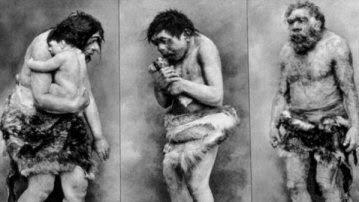 
The Grisly Folk: ... But one may doubt if the first human group to come into the grisly land was clever enough to solve the problems of the new warfare. Maybe they turned southward again to the gentler regions from which they had come, and were killed by or mingled with their own brethren again. Maybe they perished altogether in that new land of the grisly folk into which they had intruded. Yet the truth may be that they even held their own and increased. If they died there were others of their kind to follow them and achieve a better fate.

That was the beginning of a nightmare age for the little children of the human tribe. They knew they were watched.

Their steps were dogged. The legends of ogres and man-eating giants that haunt the childhood of the world may descend to us from those ancient days of fear. And for the Neandertalers it was the beginning of an incessant war that could end only in extermination.

The Neandertalers, albeit not so erect and tall as men, were the heavier, stronger creatures, but they were stupid, and they went alone or in twos and threes; the menfolk were swifter, quicker-witted, and more social — when they fought they fought in combination. They lined out and surrounded and pestered and pelted their antagonists from every side. They fought the men of that grisly race as dogs might fight a bear. They shouted to one another what each should do, and the Neandertaler had no speech; he did not understand. They moved too quickly for him and fought too cunningly.

Many and obstinate were the duels and battles these two sorts of men fought for this world in that bleak age of the windy steppes, thirty or forty thousand years ago. The two races were intolerable to each other. They both wanted the eaves and the banks by the rivers where the big flints were got. They fought over the dead mammoths that had been bogged in the marshes, and over the reindeer stags that had been killed in the rutting season. When a human tribe found signs of the grisly folk near their cave and squatting place, they had perforce to track them down and kill them; their own safety and the safety of their little ones was only to be secured by that killing. The Neandertalers thought the little children of men fair game and pleasant eating. ...

Razib Khan discusses other examples from this genre.
Posted by Steve Hsu at 11:17 AM