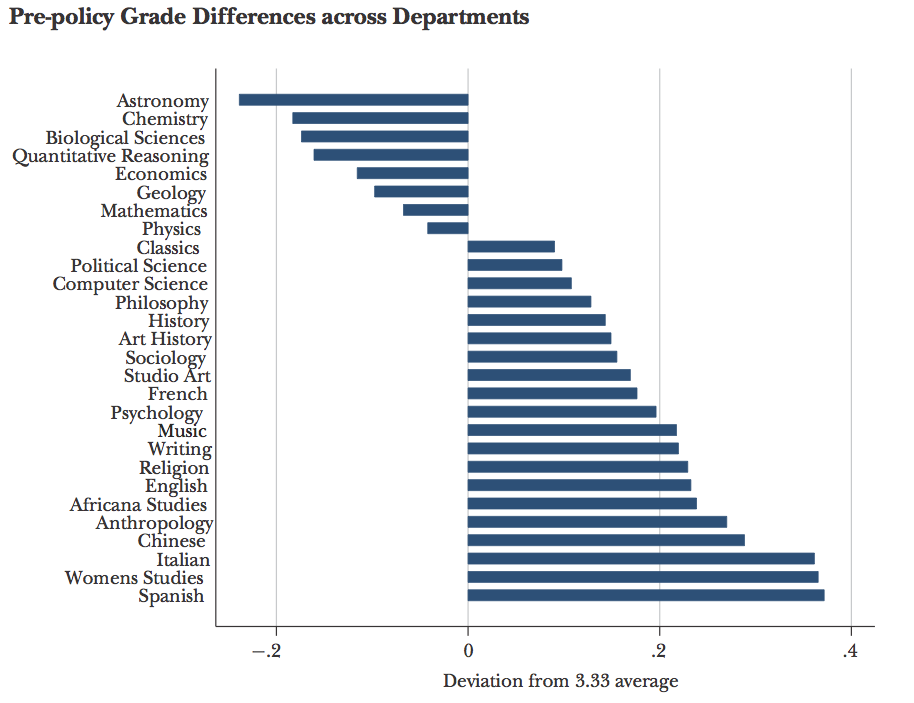 Average grades in colleges and universities have risen markedly since the 1960s. Critics express concern that grade inflation erodes incentives for students to learn; gives students, employers, and graduate schools poor information on absolute and relative abilities; and reflects the quid pro quo of grades for better student evaluations of professors. This paper evaluates an anti-grade-inflation policy that capped most course averages at a B+. The cap was biding for high-grading departments (in the humanities and social sciences) and was not binding for low-grading departments (in economics and sciences), facilitating a difference-in-differences analysis. Professors complied with the policy by reducing compression at the top of the grade distribution. It had little effect on receipt of top honors, but affected receipt of magna cum laude. In departments affected by the cap, the policy expanded racial gaps in grades, reduced enrollments and majors, and lowered student ratings of professors.

Jim Schombert and I discovered similar disparities in our study of University of Oregon student grades. The inequities would be even larger after controlling for student ability. Eventually employers may demand learning outcomes testing (see Measuring college learning outcomes: psychometry 101), and the results won't be pretty.

Via Carl Shulman and orgtheory.
Posted by Steve Hsu at 7:56 PM

"Millennials may be on track to be our most educated generation ever, but they consistently score below many of their international peers in literacy, numeracy, and problem solving in technology-rich environments."

"Our best-educated millennials—those with a master’s or research degree—only scored higher than their peers in Ireland, Poland, and Spain."

It is pretty clear that Millenials have been systematically brainwashed over their whole lives into superstition and delusion. Large parts of our universities are literally lunatic asylums.


It will be interesting to see if the Millenials will vote for that hag Hillary. She might well be the last President of the US, a fitting partner to the last Pope.

You really need to get back on your medication