Some interesting longitudinal results on female persistence through graduate school in STEM. Post-PhD there could still be a problem, but apparently this varies strongly by discipline. These results suggest that, overall, it is undergraduate representation that will determine the future gender ratio of the STEM professoriate.


The bachelor’s to Ph.D. STEM pipeline no longer leaks more women than men: a 30-year analysis

For decades, research and public discourse about gender and science have often assumed that women are more likely than men to “leak” from the science pipeline at multiple points after entering college. We used retrospective longitudinal methods to investigate how accurately this “leaky pipeline” metaphor has described the bachelor’s to Ph.D. transition in science, technology, engineering, and mathematics (STEM) fields in the U.S. since the 1970s. Among STEM bachelor’s degree earners in the 1970s and 1980s, women were less likely than men to later earn a STEM Ph.D. However, this gender difference closed in the 1990s. Qualitatively similar trends were found across STEM disciplines. The leaky pipeline metaphor therefore partially explains historical gender differences in the U.S., but no longer describes current gender differences in the bachelor’s to Ph.D. transition in STEM. The results help constrain theories about women’s underrepresentation in STEM. Overall, these results point to the need to understand gender differences at the bachelor’s level and below to understand women’s representation in STEM at the Ph.D. level and above. Consistent with trends at the bachelor’s level, women’s representation at the Ph.D. level has been recently declining for the first time in over 40 years.

... However, as reviewed earlier, the post-Ph.D. academic pipeline leaks more women than men only in some STEM fields such as life science, but surprisingly not the more male-dominated fields of physical science and engineering (Ceci et al., 2014). ... 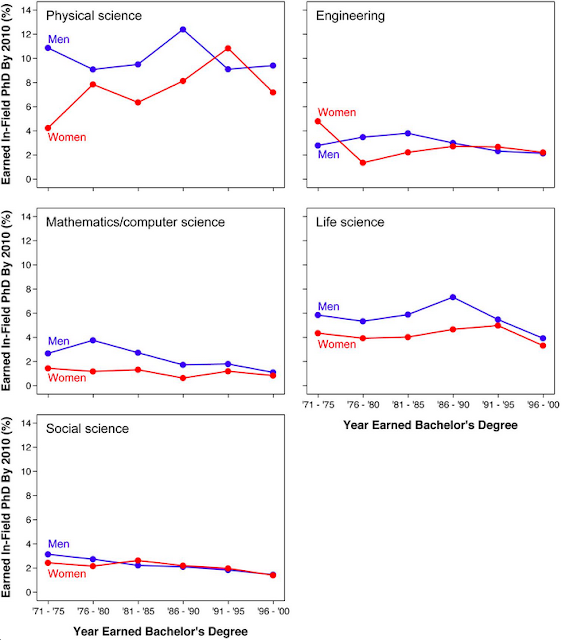 First, these gender differences are at least partially genetic in origin, and they cannot be eliminated without coercion. And, of course, the usual suspects (all delusional, tenured PhD's) are proposing rigid quota systems to redress imbalances.


Second, there is substantial over production in all STEM fields, and many STEM graduates never work in the discipline they studied. So, increasing the number of women actually practicing a STEM discipline requires a reduction in the number of men in that discipline. Note I said number, not percentage.


Then there is the huge H-1B visa overhang. Right now, a large majority of graduate students in STEM fields are foreigners, mostly Chinese. The majority reaches 75% in many research universities. Under current law, the foreign students must go home (after a brief stay for practical experience), but under the proposed amendments all of them could stay. If enacted, the propsed amendments would crush STEM salaries and lead to a large percentage of STEM graduates being unemployed. This is, of course, the exact purpose of the amendment--to create a marxian labor surplus that can be exploited.

As and addendum, the concerns over gender imbalance in STEM is really part of the vicious anti-male bigotry that has infected our schools and univerisities. Drugging school boys into insensibility with Ritalin, verbally attacking men, especially white men, in college classes and discriminating against them in every conceivable way. Why any man, again especially white but really any, would want to go to college under the present abusive regimes is a mystery. A man can earn a reasonable living as a pipefitter/plumber, electrician, carpenter or construction worker, and he will not have any accumulated debt and will not have run a gauntlet of abuse to get to his job.


The bright side for the gender nazis is that if they become abusive enough the gender imbalance problem will disappear along with the male students. And the remaining men will be gamma pussies. Even better.

Calm down. Parents are feeding their kids Ritalin, not the schools. So if it is a conspiracy to keep white men down, it is being done by their (presumably) white parents. And last college class I attended, I didn't see anybody verbally attacking anyone.

I wonder to what degree the female numbers are propped up by affirmative action. I suspect most STEM departments are under pressure to increase their numbers of female grad students and professors.

Steve, you probably have some insight into this.

As a woman in STEM (mostly T) I'm not going to leak anywhere with this economy considering my salary and benefits. Plus this economy has likely pushed up the ages women in my generation will have children. Though my sister who is S I think is more likely to leave the field since it seems like there is an oversupply of biological sciences graduates and not a ton of good jobs.

BTW, if you want a real conspiracy about a group that is being targeted in schools, take a look at: http://www.nytimes.com/2012/03/06/education/black-students-face-more-harsh-discipline-data-shows.html