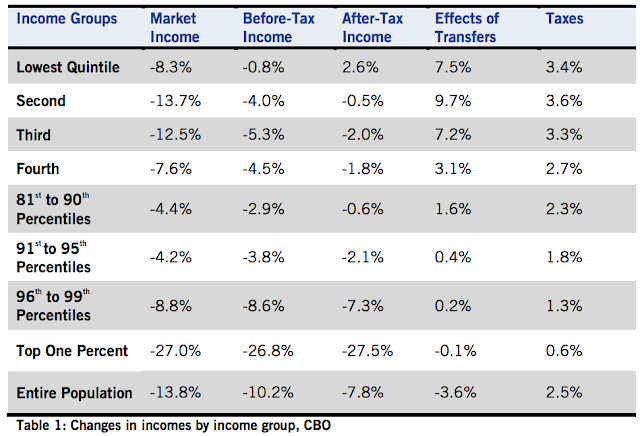 This report using CBO  (Congressional Budget Office) data claims that income inequality did not widen during the Great Recession (table above compares 2007 to 2011). After government transfer payments (taxes, entitlements, etc.) are taken into account, one finds that low income groups were cushioned, while high earners saw significant declines in income.


... The CBO on the other hand defines income broadly as resources consumed by households, whether through cash payments or services rendered without payments.2 Its definition of market income includes employer payments on workers (Social Security, Medicare, medical insurance, and retirement) and capital gains. On top of market income, CBO next adds all public cash assistance and in-kind benefits from social insurance and government assistance programs to arrive at “before-tax income.” Finally, the CBO’s last step is to subtract all federal taxes including personal income taxes, Social Security payments, excise taxes and corporate income taxes to arrive at “after-tax income” or what other government series call disposable income.3 ...


CONCLUSION: It is now widely held that inequality increased dramatically in the decades prior to 2007. For example, Piketty and Saez’s research shows that 91 percent of economic growth between 1979 and 2007 went to the wealthiest 10 percent. But when comparing the CBO’s more comprehensive definition of income (including employer benefits, Social Security, Medicare, and other government benefits), 47 percent of growth of after-tax income went to the richest 10 percent.14

Consequently, both methodologies reveal a real income inequality problem.15 But this paper once again shows that the IRS data give a misleading impression of what has happened with income inequality (not growing as fast in the period from 1979 to 2007 and decreasing, not increasing in the years after 2007). While many on the left were unhappy with the first ITIF paper and my earlier work criticizing Piketty and Saez, it is less clear how they will react to this paper.16 On the one hand, the paper argues that inequality doesn’t always rise and that it didn’t since the onset of the Great Recession. On the other hand, it argues for the efficacy of robust income-support and growth policies and ultimately provides a refutation to a critique that Republicans have made of President Obama.


Almost no increase in US Gini coefficient since 1979 once transfer payments are accounted for: 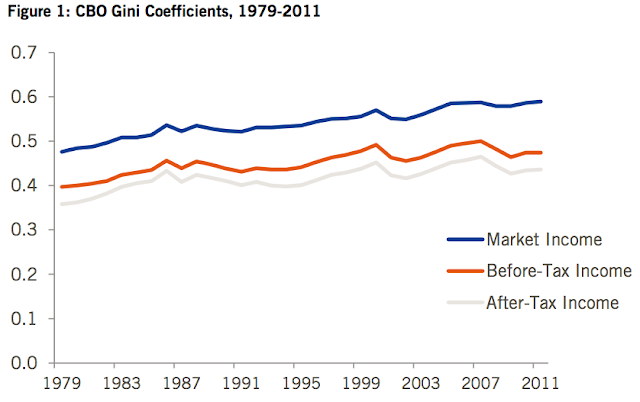 Is it possible that nameless government employees at CBO have done a better job on this problem than the acclaimed economists Piketty and Saez? (What kind of serious statistical researcher uses Excel?!?)

Piketty's book is more concerned about the concentration of patrimony/net assets/wealth than on the concentration of income on any given year, in fact ( at least in the original french edition) he argues extensively against the validity of using gini coefficients. Piketty's conclusions of increasing wealth concentration in the US since the 1970's are also corroborated by other sources, in Wolff, Edward N. (2012). "The asset price meltdown and the wealth of the middle class " the author estimates that the share of total wealth in the US held by the top 1% of households went from around 20% in 1979 to around 35% in 2010.
P.S. What's wrong with using Excel for graphing and copying data :P

Allowing medical price inflation to count as decreasing income inequality, as this study does, is a ridiculous procedure.

If anyone is interested here is some work people are doing to translate Piketty's data into R: http://simplystatistics.org/2014/06/30/piketty-in-r-markdown-we-need-some-help-from-the-crowd/