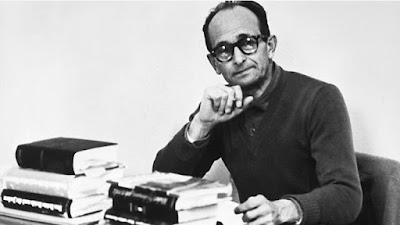 Archival work reveals that Hannah Arendt (Eichmann in Jerusalem) and many other observers were fooled by Eichmann during his trial. He was more than a cog, not merely banal, and did indeed think about his actions during the Holocaust. Bettina Stangneth's recent book, Eichmann before Jerusalem is fascinating reading.


NYTimes: ... The story of the Sassen interviews, one of the most important post-Holocaust documents, is itself a kind of cloak-and-­dagger account as Stangneth tells it, featuring hidden or lost tapes, faulty transcriptions, furtive meetings, profiteering and various other kinds of intrigue. ...

It is in these interviews and Eichmann’s own notes that he gave uninhibited vent to his version of the Holocaust and his involvement. Since he had a penchant for tailoring his endless chatting and voluminous writings to what he believed his audience desired, it may not be immediately evident why his statements in Buenos Aires should be considered more authentic than the “little man” portrait he painted in Jerusalem. The answer lies in the stance he took against what his Nazi and radical-right audience wanted to hear. For they were intent on either denying the Holocaust altogether, or outlandishly regarding it as either a Zionist plot to obtain a Jewish state or a conspiracy of the Gestapo (not the SS) working against Hitler and without his knowledge. Eichmann dashed these expectations. Not only did he affirm that the horrific events had indeed taken place; he attested to his decisive role in them. Hardly anonymous, he insisted on his reputation as the great mover behind Jewish policy, which became part of the fear, the mystique of power, surrounding him. As Stangneth observes: “He dispatched, decreed, allowed, took steps, issued orders and gave audiences.”

... Eichmann was far from a thoughtless functionary simply performing his duty. He proceeded quite intentionally from a set of tenaciously held Nazi beliefs (hardly consonant with Arendt’s puzzling contention that he “never realized what he was doing”). His was a consciously wrought racial “ethics,” one that pitted as an ultimate value the survival of one’s own blood against that of one’s enemies. ...

From a surprising admission of German inferiority — “we are fighting an enemy who ... is intellectually superior to us” — it followed that total extermination of the Jewish adversary “would have fulfilled our duty to our blood and our people and to the freedom of the peoples.” ...

See also this exchange: Arendt and Eichmann (NY Review of Books), and What it was like.
Posted by Steve Hsu at 4:43 PM