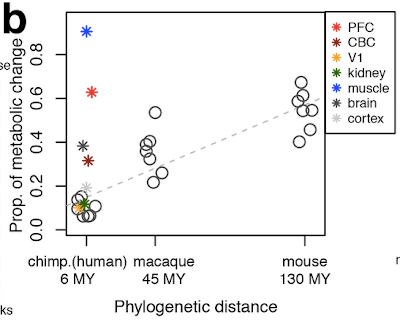 We're the geeks of the animal kingdom ;-)

Metabolite concentrations reflect the physiological states of tissues and cells. However, the role of metabolic changes in species evolution is currently unknown. Here, we present a study of metabolome evolution conducted in three brain regions and two non-neural tissues from humans, chimpanzees, macaque monkeys, and mice based on over 10,000 hydrophilic compounds. While chimpanzee, macaque, and mouse metabolomes diverge following the genetic distances among species, we detect remarkable acceleration of metabolome evolution in human prefrontal cortex and skeletal muscle affecting neural and energy metabolism pathways. These metabolic changes could not be attributed to environmental conditions and were confirmed against the expression of their corresponding enzymes. We further conducted muscle strength tests in humans, chimpanzees, and macaques. The results suggest that, while humans are characterized by superior cognition, their muscular performance might be markedly inferior to that of chimpanzees and macaque monkeys.

Physiological processes that maintain our tissues' functionality involve the generation of multiple products and intermediates known as metabolites—small molecules with a weight of less than 1,500 Daltons. Changes in concentrations of these metabolites are thought to be closely related to changes in phenotype. Here, we assessed concentrations of more than 10,000 metabolites in three brain regions and two non-neural tissues (skeletal muscle and kidney) of humans, chimpanzees, macaque monkeys, and mice using mass spectrometry-based approaches. We found that the evolution of the metabolome largely reflects genetic divergence between species and is not greatly affected by environmental factors. In the human lineage, however, we observed an exceptional acceleration of metabolome evolution in the prefrontal cortical region of the brain and in skeletal muscle. Based on additional behavioral tests, we further show that metabolic changes in human muscle seem to be paralleled by a drastic reduction in muscle strength. The observed rapid metabolic changes in brain and muscle, together with the unique human cognitive skills and low muscle performance, might reflect parallel mechanisms in human evolution.

The observed rapid metabolic changes in brain and muscle, together with
the unique human cognitive skills and low muscle performance, might
reflect parallel mechanisms in human evolution.

This is the most interesting part and is what I immediately thought once I understood the figure. I wonder where Neanderthals would have mapped.

The most parsimonious explanation is that muscle strength is expensive and as hominids became smarter they were able to use their intelligence to achieve things that previously required brute force.


Every time I stumble across this nonsense in a biochemistry paper, I have to look it up again. In my experience, biochemists, some chemists and physicians do not use SI units. Most are still cgs.


But then, many European engineers use kg-force, kg-mass, meter, second, etc. units, which is a gravitational system and definitely not SI or metric. F = ma/gc.

It might even be that reduced muscle strength was not so much a cost of increased brainpower as a supporting feature, forcing us to train our new mental capacities (teamwork, tool-making, language, etc.) to replace what we could no longer accomplish with brute strength alone, and possibly also bolstering cooperation by reducing the capacity of a single berserker for causing much disruption with his own physical force.

Even with the low muscle performance, about 80% of the glycogen energy source (http://www.thenutritiondr.com/glucose-metabolism-turning-glucose-to-fat-muscle-liver-glycogenhow-much-glycogen-do-we-have/) is locked up in muscle not available to the brain (http://en.wikipedia.org/wiki/Glycogen) and the muscle still compete for the remaining 20% glycogen from the liver, it is already a miracle that modern human is a viable specie.

I would infer it is a direct consequence rather than parallel evolutions Marginal increase in intelligence and decrease muscular strength gives marginal energy gathering advantage and survivability.

The neanderthal diet is suspected to be very high in meat and fat that gives rise to ketogenic metabolism which modern men need to specially train to achieve. This demand for large amount of high quality foods might have caused the neanderthal to go extinct when foods are scarce.

SLC16A11 is another lipid metabolism gene that we got from neanderthals. In this case it is most prevalent among Native Americans, with a sizable minority of East Asians also having the variant. It is rare among Europeans and Africans.

Would this imply a negative correlation between IQ and muscle mass WITHIN contemporary humans?