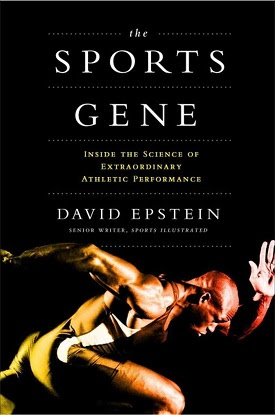 David Epstein's new book The Sports Gene is getting a lot of attention. For example, this New Yorker review is quite good, as are these interviews: NPR, Atlantic.


Atlantic: ... I lost so much sleep over this. I literally almost backed out of writing this book, because the issues of race and gender got me so nervous. Eventually my agent and one of my colleagues convinced me to just do it, in the best way I could.

But I remember being at the 2012 American College of Sports Medicine Conference, talking to the head of the physiology department at a major research university. The head of the department was telling me that he had data on ethnic differences in response to a certain dietary supplement during an exercise program, and that he would never publish it. He didn't want to get into that issue.

I heard this a number of times: He was worried it would be extrapolated into saying somehow that there were also innate intellectual differences between black and white people. When I heard that, I said, "That is a huge problem. That means science could be disappearing into the filing cabinet, into the garbage cans, because people aren't willing to take this on."

And that's when I thought, I have to do this. I'm not going to do that same thing and leave it on the cutting-room floor.

Of course, it's all been covered on this blog already: 10,000 hours rule is nonsense (Epstein's example of the former basketball player turned high jumper who barely trained yet won the world championship is excellent), myostatin mutation, etc.

"Horses ain't like people, man, they can't make themselves better than they're born. See, with a horse, it's all in the gene. It's the fucking gene that does the running. The horse has got absolutely nothing to do with it." --- Paulie (Eric Roberts) in The Pope of Greenwich Village.
Posted by Steve Hsu at 9:24 AM

Interesting paragraph from the wikipedia...

"In China, the idea that genetic differences affect sports performance is widely accepted. During the 2004 Summer Olympics, the People's Daily wrote that Chinese are "suited" to sports that require agility and technique, such as ping-pong, badminton and gymnastics.
The newspaper reported that Chinese have "congenital shortcomings" and "genetic differences" that means they are disadvantaged at purely athletic events."

A handful of horses contributed most of the genes of modern racehorses (example: the Darley Arabian), but I haven't seen much on racehorse genetics. It seems to me that level of inbreeding is too high in pursuit of just a few genes ...

Yeah, I agree. I think we could do better with race horses as there are likely to be tons of genes of small effects. What I think would be cool though, would be to extend the competitive period of race horses past two years.

O/T: How is the Cognitive Genomics coming along?

By the way, when are we getting our genomes back from BGI? They originally said May...

I know the person who discovered myostatin. I worked in the same institute as her. She was my friend. You definitely don't have the double mutation.

Here's a clip of the best example of nurture over nature in athletics or of how malleable performance can be.

At 180-ish pounds and kind of steaky, Steve probably has one, no?

The mutation is very rare. We only know of one homozygote case so based on that and not Steve's preternatural buffness is what I'm basing my claim on. Anyway, I'm willing to bet a pizza dinner in East Lansing he's null.

Agreed, it's all in da genes and lots of them that comprise the racehorse genotype. They should sequence Secretariate and compare him to one of his run of the mill progeny.

Let P(M|B) be the prob that Steve has one myostatin deficiency allele (it's the lack of myostatin that makes you buff), given that he's buff.
Then P(M|B)=P(B|M)P(M)/P(B). The prob of being buff given that you have the gene is close to 1 so basically the prob that Steve has the gene variant is the ratio of the prob of having the gene to that of being buff. So let's take a prior that it is one in 10,000 to have at least one gene and 1/100 to be naturally buff. That still makes it 1/100 to have one copy of the gene, which is good enough odds for me.

So the answer to my question is, 'probably not'.

No, that's like thinking you could make a mosaic with tiny pebbles that looked exactly like an oil painting, and it would be easier than doing the painting.

I could be wrong but at the myostatin link above there are some MAF numbers for the mutation and it's not that rare in some populations.

***I heard this a number of times: He was worried it would be extrapolated into saying somehow that there were also innate intellectual differences between black and white people. When I heard that, I said, "That is a huge problem. That means science could be disappearing into the filing cabinet, into the garbage cans, because people aren't willing to take this on." ***

1. I understand Jon Entine covered this in his book Taboo: Why Black Athletes Dominate Sports And Why We're Afraid To Talk About It. Entine also wrote an article entitled 'The Straw Man of Race' on the controversial subject of race and athletics. http://www.jonentine.com/reviews/straw_man_of_race.htm

2. In terms of self censorship that apparently happened with stereotype threat research. Maybe Cavalli-Sforza's research on gene-culture coevolution also? http://evoandproud.blogspot.co.nz/2010/10/evolution-of-cavalli-sforza-part-v.html

In case folks here are interested in Malcolm Gladwell's take on the book ;-)
http://www.newyorker.com/online/blogs/sportingscene/2013/08/psychology-ten-thousand-hour-rule-complexity.html

I'm intrigued by the mention of "Young Archimedes" by Aldous Huxley in the comments there. Has anyone here read it?
There is a PDF at http://www.naturalthinker.net/trl/texts/Huxley,Aldous/yngarch.html