This recent paper estimates that 10k common SNPs account for most of the heritability of schizophrenia. I'd guess there are some rare variants of large effect around as well. Where have I seen numbers like 10k causal variants (see also here) before? Just a few years ago, those were crazy numbers.

Schizophrenia is an idiopathic mental disorder with a heritable component and a substantial public health impact. We conducted a multi-stage genome-wide association study (GWAS) for schizophrenia beginning with a Swedish national sample (5,001 cases and 6,243 controls) followed by meta-analysis with previous schizophrenia GWAS (8,832 cases and 12,067 controls) and finally by replication of SNPs in 168 genomic regions in independent samples (7,413 cases, 19,762 controls and 581 parent-offspring trios). We identified 22 loci associated at genome-wide significance; 13 of these are new, and 1 was previously implicated in bipolar disorder. Examination of candidate genes at these loci suggests the involvement of neuronal calcium signaling. We estimate that 8,300 independent, mostly common SNPs (95% credible interval of 6,300–10,200 SNPs) contribute to risk for schizophrenia and that these collectively account for at least 32% of the variance in liability. Common genetic variation has an important role in the etiology of schizophrenia, and larger studies will allow more detailed understanding of this disorder. 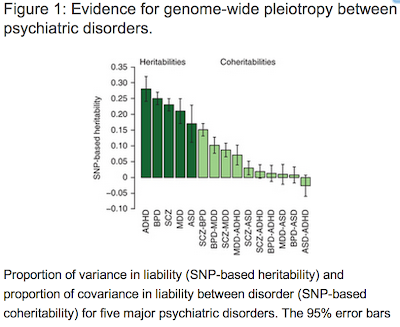 "...and encourages the investigation of common pathophysiologies for related disorders..."

No, it doesn't. Genuine mental illness, like heart disease, type ii diabetes, hypertension, most cancers, etc. simply do not exist in those few peoples still living as hunter gatherers, and rates vary enormously in other populations. SCZ is interesting. It has a very strong negative correlation with cognitive ability. Those diagnosed with SCZ in the developing world have much higher rates of remission than those diagnosed in the developed world. Heritabilities of < 30% are trivial. ADHD is diagnosed in the US ten times more often than it is in France. The French have a very low rate of CVD. It must be genetic.

BMI, blood pressure, insulin sensitivity, are all much more heritable and all are totally environmental.

It's commonly said that schizophrenia will be, on the physical level, a cluster of disorders with similar symptoms, so I guess these SNPs would be underestimates for a particular disorder; the clustering would artificially weaken searches, explaining why we haven't found them yet.

Why is it total "anhistoricity" is an almost universal human trait? "They don't know it. but they do it." This might have been, "They don't know it, but they assume it." Or what Zizek has called "unknown knowns" extending Rumsfeld's haiku. It's another example of how all pervading ideology is, the assumption that as things are is how they have always been as if all of man's creation were part of Creation, grew on trees.


A friend of one of my cousins, son of an oral surgeon, brother of a professional poker player, "came down with" SCZ, likely resulting from drug treatment for depression. There is a cure. Alexander Selkirk went through it.

Yes. All except MDD and SCZ are so vaguely defined that the are greatly overdiagnosed.

MDD is pretty unmistakable. The DSM criteria all occur together and rare "melancholic" form is clearly a physical brain illness.
SCZ---do you hear voices? do you speak in a word salad? do you have "bizarre" delusions? "bizarre" is vague until you hear someone say he believes alien vampires are eating his brain.

I remember Dick Schaap's son interviewing Bobby Fischer, an anti-Semite, and saying he was crazy. This Bobby Fischer was crazy thing is repeated.

From the standpoint responsible psychiatry Fischer was an eccentric but he wasn't crazy.

10k common SNPs account for most of the heritability of schizophrenia

And about 20K genes account for most of the heritability of everything and anything :-)

There is much more information in the genome than in just the 20k or so genes (exomes). Think of all the non-coding control regions. So 10k out of millions of snps (regions of common variation in humans; out of billions of loci in the whole genome) is a significant localization of schizo risk.

The functional effect of all your SNPs is to alter expression of those ~20K genes. One way or another. Hence, "explaining" schizophrenia, IQ and height with ~10K SNPs is not exactly explaining anything other than illustrating that things are very complex. No need to waste dNTPs and CPU cycles if the answer is that by and large genotype determines phenotype.

We already know that by and large genotype determines phenotype. Now we are learning about the specific genetic architecture and how to predict phenotype given genotype.

My point is precisely that finding out that >= half of all genes are responsible for every complex phenotype is nothing to get excited about. Not only it is entirely predictable by now but it is also pretty grim finding from a practical point of view.

I was expecting this kind of result from the beginning. In fact, I couldn't believe how overly optimistic researchers were 10 years ago with their "one gene one disease" nonsense. I suppose this was useful (while it lasted) for getting money out of big pharma and other dim funders.

Care to take a guess at how many different genes are responsible for the heritability of schizophrenia from those order 10k SNPs? Put another way, how many genes (by their expression) account for most of the heritability? (or perhaps a more interesting measure would be how many metabolic pathways are responsible for the bulk of the inheritance) Hopefully we will be able to identify a significant portion of the 10k SNPs and give meaningful answers to questions like these. I'm not sure which interests me more: being able to predict phenotype given genotype or being able to correlate phenotype with metabolic causes and the underlying genotypes. I expect the latter would tell us about environmental causes as well.

This is
really nice. Your information about beauty tips is really interesting. Thanks
for sharing this article