Synthetic biology and the hype cycle 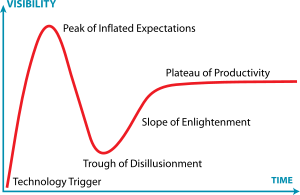 
Chronicle: ... The cost of genetic sequencing and synthesis continues to plunge, but the functions of many genes in even the simplest forms of life, like bacteria and yeast, stubbornly hold on to their secrets. Genetic networks interact in complex, mysterious ways. Engineered parts take wild, unexpected turns when inserted into genomes. And then evolution, a system that would drive any electrical engineer mad, tiptoes in.

As synthetic biology passes from precocious youth toward maturity, it is returning home to academe. Collins sees an upside to that retrenchment: The science, once a domain of biological amateurs and outsiders, can now inform basic research into life's unending complexity.

Trim and tall, Collins, 47, has had a remarkable rise. A former physicist who, until the late 1990s, knew little about molecular biology, he wears his laurels—MacArthur "genius," Rhodes scholar, Howard Hughes investigator—lightly. If you're outside the field, you'd have little idea he's considered a founder of synthetic biology.

But what is the field, exactly? As one engineer once quipped, ask five people the definition of synthetic biology, you'll get six different answers, because one person is bound to be conflicted. It's a field where most of its practitioners consider its most visible success—Craig Venter and company's wiring together of a microbial genome in 2010—to be an impressive technical feat, but not synthetic biology. The phrase has subsumed whole disciplines. Many scientists who once practiced genetic engineering, methods relatively unchanged, now operate under the grant-friendly halo of synthetic biology. ...

"The hype is a thing that's hurt the field," Collins said. "Some in the community are hyping our capabilities well beyond where we're at. I think it's better to be a bit sober. I think it's fine to speak to emerging applications and emerging capabilities, but to really qualify where we are at and what we can do now, versus what might this field bring decades down the line."

Don't miss the comments at the Chronicle, if you can stomach a view into modern hype-driven science. Contrast to the painstaking accumulation of statistical significance leading up to a Higgs announcement!


The problem with synthetic biology is characterization. This takes time and isn't sexy. I did it for 3 years, trying to properly characterize different promoter, reporter combinations. I painstakingly ground out a bit of data, but not enough for publication, and a career over before it ever began. In the era of publish or perish you quickly ligate genetic elements together, take a few quick measurements, and bang it out to the journals with a few headline grabbing keywords in the abstract. When the rubber hits the road with biotech or medical applications, the wheels fall off the wagon. Much of it could be attributed to "show boating", but in the fight for funding, the hype machine has to go into over-drive. I saw the same wave of hysteria in systems biology, and it carried on into synthetic biology, and it will move into the "big thing". But what do you do? Play down your work in the media frenzy world we live in, or go for broke?

I was very suspicious of the synthetic biology hucksters I first encountered five years or so ago, and it turns out my instincts were correct.
Posted by Steve Hsu at 7:54 AM

Synthetic biology is the next nanotechnology. I fell into the whole nanotech thing in undergrad and did some research in the field. I learned a lot about hype. Scientists had been doing what was essentially nanoscience for decades, but now that it was a cool buzzword money was pouring in.


One of my buddies from grad school has his own synthetic biology start-up. I knew, and I think he knew that I knew that he knew that his company will fail, but he's using it to build his VC-cred so he can enter that industry once his start-up goes under.

Biology is so hard it's easy. Any odd piece of nonsense can be palmed off on the public and other scientists because even basic "facts" can't be checked. If one combines outright fraud with incompetence (especially mathematical and statistical) and simple error, it is probable that a large fraction of all papers in biological and medical journals are wrong. The same can be said of many environmentally oriented fields like climatology.

I taught environmental engineering and science for 37 years at an elite college and a major research university, and I haven't got a clue about most issues. What if anything happened at Love Canal? Is DDT really a problem? A wasted. career?

There is no synthetic biology. There are bunch of con men. Their real talents are extracting money from others. USGov funds in this case. The article you link to is nauseating - I couldn't even finish reading it. The "lego" part of it refers to BioBricks, I believe. Which is like the best ever display of impotence that happens when ignorant but arrogant people have their chance to show the world what they are worth.

Collins' lab web page has a banner that shows stereochemically wrong DNA (left-handed). How more pathetic than that can it get?


There eventually will be synthetic biology. But BioBricks and the likes are not going to be credited for it. No one will be. Like almost everything in biology, it will slowly evolve from loosely coordinated efforts of thousands of scientists pursuing their own self-interests.

Your post leads me to think that you are just jealous of the money that has been pouring into synthetic biology. For someone that has done research and understands research, you speak very naively -- more like a bitter, jealous child than a professor, and, well, an adult.

Yes, synthetic biology has not achieved all its goals yet. But that can be said for cancer biology (and HIV research and anything else). Didn't Richard Nixon, way back in 1971, start the "War on Cancer" with the signing of the National Cancer Act claiming that cancer as a disease would be gone in 20 years? How did that war go? New issues keep coming up.

Synthetic biology is still a fledgling field and there is a lot of though and time being poured into figuring out what the best way to characterize genes and promoters is, how to standardize these so that all synthetic biologists do them the same way and the data is comparable. Synthetic Biology has the biggest culture of research sharing and transparency and openness of all biological research fields (and I've worked in three so far). There are labs where multiple PhD dissertations are devoted to developing models that will allow synthetic biologists to accurately predict the expression dynamics of multiple regulation arcs working together as part of a single genetic circuit. BioBricks, while slow, was a very good and foolproof way to string genetic parts together. But the BioBricks cloning system is entirely obsolete now; people use other much more efficient and multi-part assembly that can be done in one or two quick steps. Even iGEM -- BioBricks was iGEM's baby -- will soon move away from BioBricks altogether.

Synthetic Biology has had its successes beyond the simple toggle switch. And nobody with any brains will ever call Jim Collins a poser or idiot if they have ever spoken to the man.

As for the field of synthetic biology just being a rebranding, it is partially a rebranding of the genetic engineering of old -- but it is quite different. While traditional genetic engineering focused just on putting a cloned foreign gene into bacteria and producing a lot of a new product, synthetic biology's goals include control and programmability and even memory.