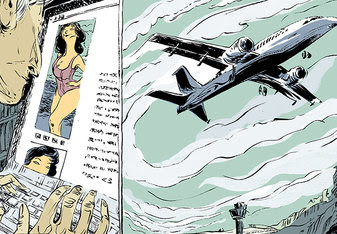 Theoretical physicist Paul Frampton was recently convicted by an Argentine court of smuggling cocaine, and sentenced to 4 years in prison. Frampton maintains he was duped into transporting the cocaine by a bikini model he had met online. I am unsure as to the facts in the case but I can say that the portrait of Paul in the article is fairly accurate. He remains, for the moment, a professor at UNC-Chapel Hill.


NYTimes: ... As Frampton tells it, his life is one unbroken line of impressive grades, advanced degrees and innumerable citations of his work in cosmology and physics. There is certainly much truth to this. “He has always been very inventive in thinking of new ideas extending and going beyond the standard model of particle physics,” says Prof. Edward Witten of the Institute for Advanced Study at Princeton. But then there is Frampton’s tendency to transfer his professional accomplishments to his personal life. In what a fellow physicist described as a “very vain, very inappropriate” talk delivered on the 80th birthday of Murray Gell-Mann, a Nobel laureate in physics, Frampton veered into autobiography, recounting how his ability to multiply numbers in his head at 4 led him to see himself as “cleverer than Newton.” This line became a refrain throughout the talk. Interspersed with the calculations and hypotheses were his Oxford grades, which, he said, showed that he, like Newton, was in the top 1 percentile for intelligence. Frampton insists that he was merely joking and that his sense of humor was misinterpreted as self-regard. Yet in many of my conversations with him, he seemed to cling to the idea of his own exceptionalism. During our first meeting, when I asked him what attracted him to Milani, he said, “Not to offend present company,” referring to me and the representative from the penitentiary service, “but, to start with, she’s in the top 1 percentile of how women look.” And in an e-mail to Milani — or, rather, the fake Milani — Frampton wrote, “As these days tick by, and I think about it a lot, the more I realize that we are the perfect couple in all respects.”

The strategy of Frampton’s defense team was to present Frampton as a brilliant man out of touch with day-to-day life. They called in a psychologist, who pronounced him unusually gullible without, however, diagnosing a mental illness. The judges sent their own doctor, who declared Frampton normal. A total of three psychological evaluations were presented at the trial, and two agreed that he had the traits of a narcissistic personality — an overblown and unrealistic image of himself. One concluded that it did not constitute a pathology, while the other suggested that there were pathological aspects to his narcissism that led to gaps in his understanding of reality.

Fidel Schaposnik, a physics professor at the National University of La Plata, which, along with the University of Buenos Aires, had offered Frampton a visiting professorship to help get him released from Devoto while he awaited trial, said of Frampton: “He’s a typical person trained at Oxford. He knows he’s part of an elite and can’t imagine such things would happen to him.” Indeed, Frampton sees academia’s denizens as creative misfits who deserve special protection. “People who are socially inept can nevertheless be the most creative people,” he told me one afternoon on the telephone. “It’s very important that they can’t be fired. This is the genius of tenure.”

He is such a brilliant man that in prison, he will have the time and opportunity to get some serious research done. I expect at least a book and a dozen of published research paper out of this unfortunate event. Scientists always moan about lack of funding and time to do research. Well, he has just landed a 4-years tenure job with no teaching time involved. The lucky guy!

Well at first I assumed he was merely an imbecile ... thinking Milani would marry an unknown (outside the diminute world of theoretical physics) divorced 68 year old with poor health. But as I read the article, I found that he was a mean, ridiculously overconfident imbecile, 5 std. deviations confidence a 32 year old model would marry him? planning to transport the cocaine and fool drug smugglers ( his airport text messages)? The guy is a narcissist. I'm glad the argentine court system didn't give him preferential treatment.

"his lawyer asked whether Frampton was also calculating the weight of one of the judges.

“I’m embarrassed to admit it, but yes,” Frampton answered. “I calculated that he must weigh 100 kilos.”

“You calculated badly, as badly as you did about your second marriage,” the judge responded. “I’m 124 kilos.”

The thing I have not understood from the beginning of this is there are lots of ways to see who you are actually talking to these days, like a cam. Why didn't he talk to her on cam? Surely a model would have a cam. I just don't buy this whole thing.

The really big boobs thing. Don't get it. Never have at all. Too low an IQ I guess.