I haven't read this yet but it looks quite interesting. Koxinga is pretty well known in Taiwan and China, of course (see picture at bottom).


Princeton University Press: During the seventeenth century, Holland created the world's most dynamic colonial empire, outcompeting the British and capturing Spanish and Portuguese colonies. Yet, in the Sino-Dutch War--Europe's first war with China--the Dutch met their match in a colorful Chinese warlord named Koxinga. Part samurai, part pirate, he led his generals to victory over the Dutch and captured one of their largest and richest colonies--Taiwan. How did he do it? Examining the strengths and weaknesses of European and Chinese military techniques during the period, Lost Colony provides a balanced new perspective on long-held assumptions about Western power, Chinese might, and the nature of war.

It has traditionally been asserted that Europeans of the era possessed more advanced science, technology, and political structures than their Eastern counterparts, but historians have recently contested this view, arguing that many parts of Asia developed on pace with Europe until 1800. While Lost Colony shows that the Dutch did indeed possess a technological edge thanks to the Renaissance fort and the broadside sailing ship, that edge was neutralized by the formidable Chinese military leadership. Thanks to a rich heritage of ancient war wisdom, Koxinga and his generals outfoxed the Dutch at every turn.

Exploring a period when the military balance between Europe and China was closer than at any other point in modern history, Lost Colony reassesses an important chapter in world history and offers valuable and surprising lessons for contemporary times.

Tonio Andrade is associate professor of history at Emory University. He is the author of How Taiwan Became Chinese: Dutch, Spanish, and Han Colonization in the Seventeenth Century.

More from the author:


... Most westerners even believe that the Chinese invented gunpowder but never used it in weapons, reserving it for fireworks.

In fact, the first guns were developed in China, as were the first cannons, rockets, grenades, and land mines. The Chinese eagerly studied foreigners’ weapons, such as Japanese muskets and English cannons. So it’s no surprise that on Taiwan, the Dutch found themselves hard pressed by Chinese firepower. The Dutch were no laggards. Dutch cannons and handguns were famous throughout Europe, and the Dutch arms industry was a major part of its booming early-capitalist economy. Yet the guns aimed against them by their Chinese foes were strikingly effective, and the Chinese gunners were so fast and so accurate that, as one Dutch commander wrote in chagrin, “they put our own men to shame.”

Yet an even greater Chinese advantage in this Sino-Dutch War was in the area of leadership. The Dutch were known throughout Europe as the inventors of modern military drill, and, indeed, Dutch innovations revolutionized warfare in Europe. Dutch drilling regimes — in which musketmen were trained to march in lockstep, carry out intricate maneuvers, and act as one coordinated unit — spread throughout the West, prompting military historians to argue that Europeans possessed a special “Western Way of War,” making them the most effective fighting troops in the world.

But, in a striking coincidence of world history, at the same time as Europeans were developing their new drilling regimens, China was undergoing a military revolution of its own. Perhaps one should instead say “revival” of its own, because ancient Chinese armies were incredibly well drilled and disciplined. Still, the revival of the 1500s and 1600s went well beyond ancient models, and Chinese commanders experimented with training regimens that sound strikingly modern – the simulation of combat stress, the assumption of prone positions for firefights (Westerners were trained to stand up, exposing their bodies to more bullets), advanced strength and endurance training regimens.

The Chinese forces the Dutch faced on Taiwan were extremely well-trained, and the Dutch, for all their Western Way of War, were routed on the battlefields like novices.

But the most important Chinese advantage was in strategic and tactical culture. Chinese military commanders were able to draw on two millennia of careful thinking on warfare. Most Westerners know about Sun Tzu’s Art of War, which is read by CEO’s from Germany to California, but most westerners have no idea how many brilliant strategists, tacticians, and logistics experts succeeded Sun Tzu, building the world’s richest corpus of military thought.

Zheng Chenggong and his generals referenced complex scenarios and stratagems by means of a few words, much as westerners use the term “Trojan Horse.” This store of knowledge helped the Chinese to outwit the Dutch at nearly every turn, luring them into traps, making careful use of terrain, combining naval and land power in unexpected and effective ways.

The Dutch, concluding that they had no hope to prevail against the superior Chinese forces, ultimately gave up and handed Taiwan over to the Chinese. The next war between Chinese and Western forces wasn’t fought for another two centuries, and by that time the global balance of power had shifted. Europe was industrializing. China was in decline. 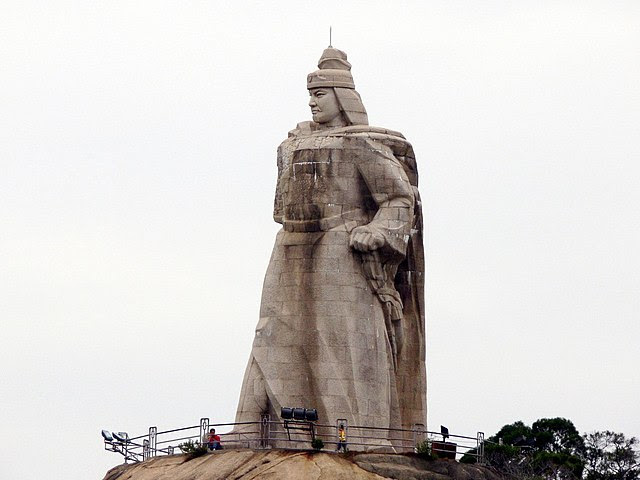 the portuguese were also forced out of many of their indian ocean strongpoints by the omanis, ottomans, etc.

A popular joke/riddle for grade school kids in Taiwan is "What is the name of Koxinga's mother?"

There is no better knowledge in warfare than local knowledge.

Outnumbering your enemy 20 to 1 is also pretty helpful.

In modern warfare the attacking force should outnumber defenders by 3:1 when going up against fortified defenders. http://noblecotactical.com/1/post/2013/3/attacking-force-ratio-31-rule.html

I imagine that in the 1600's this ratio should be much higher given that the destructive force of firepower was much more modest. History is replete with examples of much smaller force defenders behind castle walls holding out against much larger enemies. Here's a example of 30 holding against 100's-1,000's? of attackers in 1304 for over 4 months. http://en.wikipedia.org/wiki/Sieges_of_Stirling_Castle