You may have read that there is more genetic variation within major ethnic groups than between ethnic groups. That this precludes the possibility of group differences is Lewontin's Fallacy (explained in pictures).

Deep sequencing of the human genome, which reveals rare variants (here, defined as those found in fewer than 0.5 percent of the population), shows that there is actually more variation between groups than within groups. (So what you may have been taught in school is not true -- sorry, that's how science works sometimes.) The figure below, from this July 6 Science article, shows that over 50 percent of rare genetic variants are found in African populations (which have greater genetic diversity) but not in European populations. About 41 percent of all rare variants are found only in Europeans and not in Africans, and only 9 percent of the variants are common to both groups.

These rare variants are likely recent mutations. Unsurprisingly, they differ in populations that have been geographically separated for tens of thousands of years. 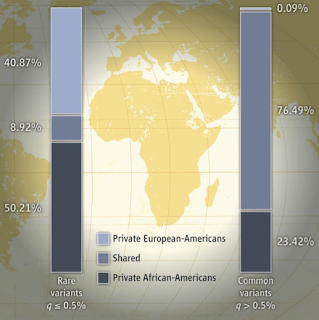 The excerpt below is from this paper, in the same issue of Science.


Because rare variants are typically the result of recent mutations, they are expected to be geographically clustered or even private to specific populations. Using a measure of variant sharing between two samples (7), we found that for common variants, any two European populations appear to be panmictic, whereas for rare variants, European populations show lower levels of sharing (fig. S7). In general, the level of sharing depends on geographic distance, with the dependence increasing substantially with decreasing allele frequency (fig. S8). The Finnish population shows substantially lower levels of sharing with other European populations than predicted by geographic distance, which is consistent with hypotheses of a historical Finnish demographic bottleneck (23). Levels of rare variant sharing are even lower when comparing populations from distinct continents. Thus, catalogs of rare variants will need to be generated locally across the globe.

We found substantial variation in the total abundance of variants across populations, even within Europe (Fig. 3 and fig. S7D), which is likely due to demographic history. In particular, we observed a north-south gradient in the abundance of rare variants across Europe, with increased numbers of rare variants in Southern Europe and a very small number of variants among Finns, who had about one third as many variants as southern Europeans. 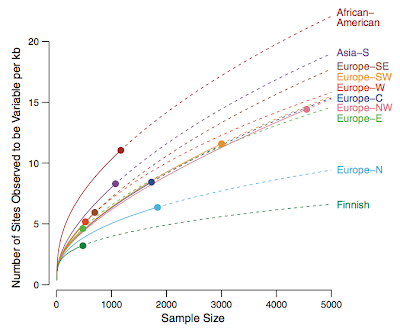 There seems to be a correlation between latitude and prevalence of rare variants. Could mutation rates vary due to average temperature?
Posted by Steve Hsu at 10:40 PM

Would be interesting to see East or Central Asians plotted on this, seeing as how far off from everyone else Northern Europeans and the Finnish are pulled away from the rest of Europe.

Yes, does rare mean rare among humans in general, or just rare among the ethnic groups included in the sample? Whichever it is, more extensive sampling would have been required in order to tell.

I was once told by a friend in Japan that within the population in Japan there is a greater degree of genetic diversity that within any other Asian ethnic group. I have no idea if this is correct or, if it is, what would account for the diversity. I remember we speculated about different waves of immigrants arriving on top of the indigenous population and then being subject to long periods of relatiave isolation, etc. I'd be curious whether anyone has more information on my friend's assertion. Thanks.

Is the number of rare variants the accepted measure of genetic diversity? It seems like a measure of population diversity should also account for the number of individuals possessing each variant. I understand that rare variants are a very relevant measure for the IQ study (if I understand correctly, the number of variants provide the raw material for the variation which determines how much you can theoretically optimize). Where I find rare variants less convincing as a measure is comparing population diversity. Is it reasonable to consider a population of 97 A, 1 B, 1 C, 1 D more diverse than one of 34 A, 33 B, 33 C? Can anyone suggest any relevant references?

Ultimately "genetic diversity" is just a proxy for things we really want to know, like the distribution of actual causal variants.

Although no one knows for sure, it seems likely that the vast majority of rare variants will be deleterious. See my BGA talk slides for an evolutionary argument: the basic idea that a random mutation is more likely to hurt than help; those that do help get pushed up in frequency by selection until they are no longer rare.

blonde and red hair, blue and green eyes, pink nipples are found only in white women. And magazine covers show their alluring beauty. Some East Asians have milky white skin, but no variation in hair or eyes. That's one physical trait that makes White people special and White women the standard of beauty.

But low birth rates and mass immigration is designed to exterminate Whites. Look how Homogenous China, Korea, Japan is. Morphologically.

Single Nucleotide Polymorphisms look interesting in lab, but when it comes down to daily life, would you rather spend your life with a 6ft tall buxom Nordic blonde or some one else.

Not sure I understand why common variants couldn't be the cause of human differences either? I thought the current thinking was that differences in complex traits were due to a combination of lots of small effect common variants plus larger effect rare variants? So wouldn't the true level of relevant genetic variance be somewhere between the number we derive from rare variants and the number we were going by in the past?

Considering the irresponsibly out of control rate at which these negroes breed, of course you'll see a certain amount of variation.
I wonder how many centuries we'll have to wait before we see a mutation that can plan ahead, hold down a job or refrain from illegal behavior?

It makes sense that the majority of rare variants would be deleterious. Rare variants might be more likely to be advantageous for traits which are not likely to have been selected for, but that most people would consider beneficial. I think this is a good example:
http://www.nature.com/news/gene-mutation-defends-against-alzheimer-s-disease-1.10984 What sorts of examples of other advantageous rare variants are there? (specific disease resistance like that for AIDS perhaps, but my bet would be that involves an immune system tradeoff) Of course this does raise the question of how to tell if something is advantageous. How do we know if there is a problem in environmental conditions that are currently uncommon? For me this is where the idea of genetic engineering becomes worrisome. I think it is dangerous to attempt to highly optimize a poorly understood system (I think this is one of the major sins of economics, e.g. stagflation, if one attempts to push a linear model to its limits one may find out it is nonlinear after all ;-) because of unintended side effects. One (somewhat speculative) example is vitamin C production in primates. Speculation is that it was selected against when the population lived in a dietary vitamin C rich environment (fruit). That is not a typical case in much of the world and means we get scurvy if deprived of dietary vitamin C unlike most animals. But who knows if disabling the enzyme responsible was helpful in our evolution to intelligence...

latitude is correlated with length of human habitation. Europe and Siberia and America and so forth were settled only after humans had been in Africa for 100k years or so.

Right, but deleterious how? Without any overt unmistakable pathology the deleteriousness may vary from one environment and society to another.

I will keep beating my dead horse.

Perhaps it would be more accurate to say non-advantageous (i.e. not conferring a fitness advantage in the current environment). If a variant is advantageous it should become less rare (has the relative rate of positive and negative selection been established?). I definitely agree with you about "the deleteriousness may vary from one environment and society to another" (I think I have alluded to the same idea elsewhere in Steve's blog) I think this is a significant issue when environmental change is occurring more rapidly than evolutionary change (which I would argue has been the case for the last few thousand years and especially for the last few hundred years). What conclusions do you draw from this dead horse you are beating? ;-)

I agree but am not sure I can draw any conclusions. If I understand Steve's results it appears that despite very rapid (in evolutionary terms) cultural change, over the last say 3000 y, for the homogeneous population of the study there has still been selection for some alleles over others. I would expect that the rarer alleles would be not so much more likely to be deleterious if which alleles were +s and which -s changed with every generation.

I am a participant in the BGI study but am less than an amateur on this subject.

But it still may be the case. Metaphorically: a tree which thrives only in alpine Sikkim and won't grow at all anywhere else. Are there such?