I was playing a board game with the little guy and he was convinced he had developed a better method to roll the die. I asked him to check that his method actually works, so he obtained the distribution below. His number sense and intuition for probability are unusual for a six year old. He can do things I certainly could not when I was his age, but on the other hand he's had somewhat better instruction  :^)

At this point he doesn't know how to interpret the results of his statistical tests. He did tell me that if his dice rolling method didn't work then each row of marks would be the same. I wasn't there when he obtained this data. 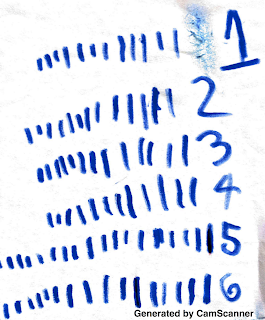 I just cut one mark in half, but there are no more.

If you assume that the goal is to get more 5's and 6's, then a binomial test returns a p-value of ~0.135 for 35/85 successes against a null of 1/3. (Though we also need to make assumptions about the experimental set-up: i.e. stopping after a fixed number of trials.)

My 1st grade science fair project actually just involved rolling 2d6 252 times, and displaying the observed results next to the expectations on my poster. I recall that my most anomalous result was rolling 29 10s, when expectation was 21.

I had no idea how to quantify *how* anomalous this was back then, but the project was still good enough for "K-3 Most Outstanding" in the medium-sized Texan city I was in.

Incidentally, I never tried to figure out how to bias dice rolls, but I seem to recall my sister actually succeeding in that endeavor when she was 8 or 9 years old, somehow rolling fifteen 2s in seventeen 1d6 attempts after some shenanigans involving dipping the dice in water and God knows what else.

It is interesting to speculate how much understanding of probability a six year old *should* have. After our son was born an acquaintance gave us this book:
The Magic Years - Selma Horwitz Fraiberg - http://www.amazon.co.uk/Magic-Years-Selma-Horwitz-Fraiberg/dp/0684825503
It was an interesting read. What I remember from this is that it's natural for a child to engage in magical thinking and that there are phases that a child grows through. It was surprising how much the magical thinking correlated with the (now discredited) ideas of James Frazer in "The Golden Bough". It may be that the ideas in this book are also discredited. But I'm convinced that it's better for imagination and creativity to leave a bit of that magical primitive world intact.

You are too soft on your son Steve. In order to sink in his mind for ever the laws of probability, you should have played dice with him for money, and clean off all his pocket money. And to make the lesson undelible, instead of returning his losses you should have made the lesson unforgettable and drink a beer with his lost money. If he cries, remind him that "This is Sparta!".


I applied these methods on my children and they turned out well.