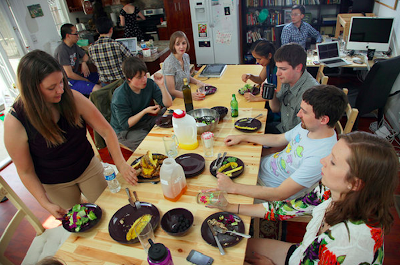 When I started my first company we rented a huge house in N. Berkeley (which we called the Geek House, or Geek Haus) and furnished it in one shot (beds, desks, tables, lamps, dressers) with a mega trip to Ikea. The coders lived in the house, generally one or two to a room, and the downstairs had a server room and rows of workstations. The whole thing was wired with ethernet (pre-Wifi!) and the garage was filled with computers. We even had mats in the back to practice BJJ and a pullup bar (I tied another Berkeley physics PhD named Aram in the pullup contest with 18). What else could anyone ask for? When we closed a bigger VC round we got some real office space in Emeryville next to the Siebel building.

I actually never lived in the Geek House. My girlfriend and I rented a 3500 square foot house in the Piedmont hills from a Berkeley chemistry professor who was on sabbatical. From the decks and patio you could see SF, the Bay Bridge and the Golden Gate Bridge. If you ever get a chance to live in the Berkeley hills don't turn it down :-)

NYTimes: This is not some kind of dorm, but a “hacker hostel.” It’s one of several in the Bay Area that offer short- or long-term stays for aspiring tech entrepreneurs on the bottom rung of the Silicon Valley ladder, those who haven’t yet achieved Facebook-level riches. These establishments put a twist on the long tradition of communal housing for tech types by turning it into a commercial enterprise.

The San Francisco hostel is part of a minichain of three bunk-bed-stuffed residences under the same management, all places where young programmers, designers and scientists can work, eat and sleep.

These are not so different from crowded apartments that cater to immigrants. But many tenants are here not so much for the cheap rent — $40 a night — as for the camaraderie and idea-swapping. And potential tenants are screened to make sure they will contribute to the mix. Justin Carden, a 29-year-old software engineer who is staying in another hostel, in Menlo Park, while working on a biotech start-up, talks about the place as if it were Stanford.

“The intellectual stimulation you get from being here is unparalleled,” Mr. Carden said. “If you’re wanting to do something to change the world and make it a fundamentally better place, you need to be around the right people.”


Notice how idealistic Mr. Carden is. His goal is to change the world by creating something great -- not to earn a seven-figure bonus by ripping the face off a muppet (client)  ;-)

Compare to Foo Camp.
Posted by Steve Hsu at 9:32 AM

'talks about the place as if it were Stanford....“The intellectual stimulation you get from being here is unparalleled,”
Mr. Carden said. “If you’re wanting to do something to change the world
and make it a fundamentally better place, you need to be around the
right people.”'

But given the individualist ideology of the US and the West in general it's not surprising this thought is never expressed. The CalTech graduate was smart going in and will be even smarter coming out compared to someone as smart going in but going to U Mass or whatever.

A big part of me wants to move out to the west coast. I know the old phrase is that it's not where you live that's holding you back, but it just seems like a gigantic difference in culture. People in the whole NYC/DC/Boston ecosystem are concerned almost exclusively with gaining relative status/wealth by exploiting power dynamics. I imagine human nature is still much the same in the valley, but at least your producing something.

The great thing about the SV/tech/science ethos is that you gain prestige by actually inventing and building cool things. As you know, this is not the case in NYC or DC. DC gives me the creeps when I visit. Wall St. is OK for me because I speak the language and have friends there, but it's nowhere near as fun as SV.

I love Paul Graham stuff, I just wish I knew about it at 16. Sadly, I'm a little old and settled in a gilded cage to throw it all away chasing a brand new career. It's family time now. However, I do think I may move out there at some point or send my kids to college out there. Lord knows I'm going to tell them all the stuff nobody told me.

The girl on the left is quite the chubster.