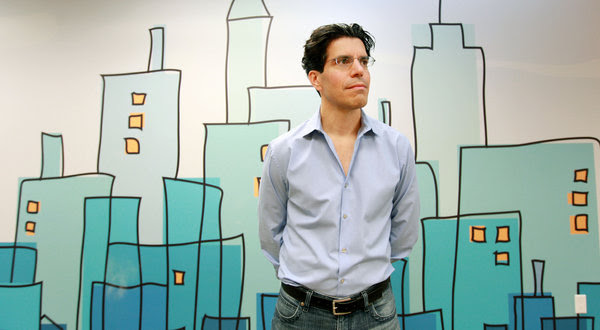 The NY Times has a great profile of Gil Elbaz, founder of the startup which eventually became Google AdSense.

Elbaz's early aspirations sound like those of other Caltechers, except perhaps the part about being rich :-)

NYTimes: AT 7 years old, Gilad Elbaz wrote, “I want to be a rich mathematician and very smart.” That, he figured, would help him “discover things like time machines, robots and machines that can answer any question.”

He is old enough to have experienced the horribly dull pre-internet technology world. Young people these days can't imagine how much more limited opportunities were then for people with math/sci/engineering ability. From the article, Elbaz definitely had an entrepreneurial bent already as a kid.

... At Caltech, Mr. Elbaz majored in applied science and economics. Interested in the subject of monopolies, he won an award for a paper that determined that companies would take financial losses to corner their markets.

He worked for I.B.M. for two years, looking at the use of computers in problems of manufacturing, then went to Sybase, a database company. This was in the early 1990s, when I.B.M. was stumbling in the transition from mainframe computers to servers and PCs.

His younger brother says he thinks that the experience changed him. Many employees were “just trying to hold on to their jobs, not working together for the company,” Eytan says. He recalls how Gil, concerned about how employees were hoarding their data, “started talking about how much better it would be if people shared data.”

Mr. Elbaz then joined a semiconductor start-up called Microunity and became a consultant, saving money and playing the stock market to help finance his own first business. His father gave him $10,000 to invest for him, which Mr. Elbaz tripled in 18 months. When Mr. Elbaz and a Caltech friend decided to form a company in 1998 — it became Applied Semantics — his father told him to put the stock winnings into it.

Applied Semantics software quickly scanned thousands of Web pages for their meaning. By parsing content, it could tell businesses what kind of ads would work well on a particular page. It had 45 employees and was profitable when Google acquired it in 2003 for $102 million in cash and pre-I.P.O. stock.

While Mr. Elbaz would not say how much he made from the deal, his father’s $30,000 from the stock investments was eventually worth $18 million. “He certainly changed my retirement,” Nissim Elbaz says.

When I met Elbaz a few years ago, I have to admit I thought the business model for his current startup Factual was kind of shaky. Although I'm a proponent of Big Data, doing stuff that is technically cool is not the same as creating economic value. My understanding from someone at WolframAlpha is that cleaning and "curating" data is a lot of work!

... His mental and financial assets, he says, are like gifts he needs to deploy so the world works better.

“If all data was clear, a lot fewer people would subtract value from the world,” he says. “A lot more people would add value.”

“Gil is pretty far ahead of the rest of us, the one entrepreneur where it takes a few meetings before I really understand everything he is talking about,” says Ben Horowitz, a venture capitalist who backed Factual through his firm, Andreessen Horowitz. “Three years ago, he thought Factual was his biggest chance to change the world. Over time, the world has moved his way.”

... Factual’s plan, outlined in a big orange room with a few tables and walled with whiteboards, is to build the world’s chief reference point for thousands of interconnected supercomputing clouds. The digital world is expected to hold a collective 2.7 zettabytes of data by year-end, an amount roughly equivalent to 700 billion DVDs. Factual, which now has 50 employees, could prove immensely valuable as this world grows and these databases begin to interact.

It's funny to me that you wrote :
My understanding from someone at WolframAlpha is that cleaning and "curating" data is a lot of work!

I was having exactly that discussion with some friends the other day.  So much of what is being built in the app-sphere is really just curating existing data.

Gil is also behind CommonCrawl, the only open dump of an Internet-wide crawl.  Incredibly useful data set, which I'm working with right now at my current job http://commoncrawl.org