Physicists can do stuff 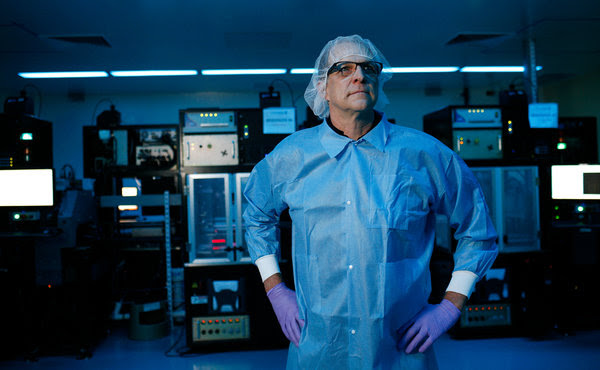 With the exception of George Church, everyone mentioned below has a background in physics (even Larry Smarr). Physicists are not like other types of "experts" !

See also Prometheus in the basement.

NYTimes: ... Bill Banyai, an optical physicist at Complete Genomics, has helped make that happen. When he began developing a gene sequencing machine, he relied heavily on his background at two computer networking start-up companies. His digital expertise was essential in designing a factory that automated and greatly lowered the cost of mapping the three billion base pairs that form the human genome.

The promise is that low-cost gene sequencing will lead to a new era of personalized medicine, yielding new approaches for treating cancers and other serious diseases. The arrival of such cures has been glacial, however, although the human genome was originally sequenced more than a decade ago.

Now that is changing, in large part because of the same semiconductor industry manufacturing trends that opened up consumer devices like the PC and the smartphone: exponential increases in processing power and transistor density are accompanied by costs that fall at an accelerating rate.

As a result, both new understanding and new medicines will arrive at a quickening pace, according to the biologists and computer scientists.

“For all of human history, humans have not had the readout of the software that makes them alive,” said Larry Smarr, director of the California Institute of Telecommunications and Information Technology, a research center that is jointly operated by the University of California, San Diego, and the University of California, Irvine, who is a member of the Complete Genomics scientific advisory board. “Once you make the transition from a data poor to data rich environment, everything changes.”

Complete Genomics, based in Mountain View, is one of more than three dozen firms hastening to push the cost of sequencing an entire human genome below $1,000. The challenge is part biology, part chemistry, part computing, and in Complete Genomics’ case, part computer networking.

Complete Genomics is a classic Silicon Valley start-up story. Even the gene sequencing machines, which are housed in a 4,000-square-foot room bathed in an eerie blue light, appear more like a traditional data center than a biology lab.

In 2005 ,when Clifford Reid, a successful Silicon Valley software entrepreneur, began to assemble his team, he approached Dr. Banyai and asked if he was interested in joining a gene sequencing start-up. Dr. Reid, who was also trained in physics and math, had spent a year as an entrepreneur-in-residence at the Massachusetts Institute of Technology, where he had become a convert to bioinformatics, the application of computer science and information technologies to biology and medicine.

Dr. Banyai had even less experience in biology. [ ... mastery of so difficult a subject granted the right to invade others ... ]

Formerly with the Internet networking start-ups GlimmerGlass and Silicon Light Machines, he in turn began by reading a pioneering 2005 article in the journal Science in which a group of researchers in George Church’s genetics laboratory at Harvard describe a new technique intended to speed gene sequencing. ...


The other day a colleague in the humanities complained to me that his department had to handle 500 majors whereas physics probably only graduates 30 a year. I should have replied, Yes, but our graduates Can Do Stuff! ;-)
Posted by Steve Hsu at 5:30 PM

A former working stiff weighs in:
I am happy to hear he has some practical knowledge. I mean he must know of Phillips. Mortorq, square--although there was another name for that. Supradrive, tri wing, spline, and “star head” sometimes known as polydrive. Those tools and driver heads have served humanity well.

Michio Kaku also agrees that physicists can do things...

"Now, he says, the U.S. is losing its edge because we're not producing
enough scientists. "Fifty percent of Ph.D. physicists are foreign-born,
and they're here compliments of the H1-B visa," Mr. Kaku relates.
"There's a brain drain into the United States; that's why we're still
No. 1. But it can't last forever." China and India are slowly luring
back their natives, while our top students are eschewing the hard
sciences for lucrative careers in areas such as investment banking.


"I have nothing against investment banking," Mr. Kaku says, "but it's
like massaging money rather than creating money. If you're in physics,
you create inventions, you create lasers, you create transistors,
computers, GPS." If you're an investment banker, on the other hand, "you
don't create anything new. You simply massage other people's money and
take a cut."

Its not as bad as it seems. A lot of the reason Americans don't go into STEM has to do with H1-B wage depression. If the H1-B supply decreases, people will meet the challenge. Americans are still willing to work very hard to make money (and before you make any silly insinuations, they are smart enough to do STEM.) Right now STEM doesn't make a lot of sense. It isn't seen as prestigious, and really doesn't pay THAT well relative to alternatives (you can't just compare degree outcomes, you have to look at the options STEM capable kids have. Finance or tech start ups are where it is at right now.)

Since the H1-B decline will be  gradual, there might not be any serious problems at all.

I was very pleased to find this site. I wanted to thank you for this great read!!
BMX Freestyle Bikes

I am confused? Why
does the Username say Dan?Basketball Games
NBA

Another great post
Admin, I sure could have used this back in 20012 when I started reading
blogs. Oh and thanks for the lovely link :)Horton crossbows

Exceptional
posting, you’ve outlined some good details, I likewise get pregnant it is a
excellent web page.Mathews bows

Thank you so much,
this has been a big help but can you tell me how to get my picture to show
when I leave a comment.Sports
accessories

i really likes the
way you put the information. Very funny but educative as well. thumb up
!Golf Ball
Caps