Eugene ("Track Town USA") has a long history in running (for instance, Nike was founded here) and hosts a number of high profile track meets during the spring and summer. One of the things I enjoy about these meets is that while they are here I often bump into superhumans (world class athletes) around town, like at the cafe or ice cream shop :-)

Speaking of superhumans, below is a picture of decathlete Ashton Eaton, who may soon have a claim on the title World's Greatest Athlete. The last time (2009) the USATF National Championships were here in Eugene, I predicted great things ahead for him. Eaton, then only a junior, placed second in the US championships. This year (competition completed yesterday) he won by a huge margin, with a total that is the 5th best all-time US score and 13th best in the world. Eaton has incredible times in the sprints (PRs around 10.3, 13.3, 46, IIRC) and is still just learning the technical aspects of the high jump and the throws. In the next few years he could break the world record. 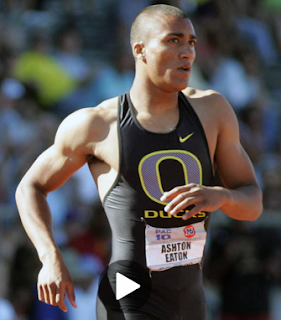 Two winters ago UO had a family day at the rec center, and invited some prominent athletes to spend time with the kids. My twins got to play dodgeball with Eaton for about half an hour -- there were no other families on the court. Eaton took it easy on them :-) When they get older I'll remind them about their time with the World's Greatest Athlete!
Posted by Steve Hsu at 3:27 PM

Clyde Drexler is 6"7 but (reportedly) ran a 4.5 and benched well over 300 when coming out of college. Michael Jordan would probably also have made a good decathlete and he is around 6"6. One problem I have with "World's Greatest Athlete" is that they are drawing from a small pool in the decathlon, as there is little monetary incentive. But I do think the sweet spot for the decathlon might be just over 6 feet, at least for now. Before Usain Bolt no one would have believed a 6"5 could be the sprint king ...