Everyone seems to want to know what I think about the WSJ excerpt Why Chinese Mothers Are Superior, from Amy Chua's new book Battle Hymn of the Tiger Mother. See here for some discussion on Quora.

When I first read the piece I thought Chua sounded like a nutcase -- more extreme than even the nuttiest mothers of the other Chinese kids I had grown up with. Later I realized that the excerpt is not from a parenting book, but rather a memoir, and that Chua is making fun of her younger self in the excerpted chapter. See this interview with Leonard Lopate for more nuanced comments from Chua, and this NYTimes article.

The WSJ excerpt has been widely discussed, but I have yet to see anyone point out what the real data says about parents' ability to shape their children (other than by passing on their genes). See here for a long post I wrote just over a year ago on the subject:

In what may have been the most influential article ever written in the field of developmental behavior genetics, Plomin and Daniels (1987) reviewed evidence that a substantial portion of the variability in behavioral outcomes could not be explained by the additive effects of genotype or the environmental influences of families. They suggested that this residual term, which they called the nonshared environment, had been neglected by environmentally oriented researchers who assumed that the most important mechanisms of environmental action involved familial variables, like socioeconomic status [SES] and parenting styles, that are shared by siblings raised in the same home and serve to make siblings more similar to each other. Indeed, Plomin and Daniels argued, once genetic relatedness has been taken into account, siblings seem to be hardly more similar than children chosen at random from the population.

In other words, despite a lifetime of proximity, your adopted child may bear no more similarity to you (in terms of, e.g., intelligence) than someone selected at random from the general population. The shared family environment that your children (biological or adopted) experience has little or no measurable effect on their cognitive development. While there are environmental effects on intelligence (the highest estimates of heritability for adult IQ are around .8, and some would argue for a lower value; see here for Turkheimer's work suggesting low heritability in the case of severe deprivation), they seem to be idiosyncratic factors that can't be characterized using observable parameters such as the parents' SES, parenting style, level of education, or IQ. It is as if each child experiences their own random micro-environment, independent of these parental or family characteristics.

... The naive and still widely held expectation is that, e.g., high SES causes a good learning environment, leading to positive outcomes for children raised in such environments. However, the data suggests that what is really being passed on to the children is the genes of the parent, which are mainly responsible for, e.g., above average IQ outcomes in high SES homes ...

The implications are quite shocking, especially for two groups: high investment parents (because the ability of parents to influence their child's development appears limited) and egalitarians (because the importance of genes and the difficulty in controlling environmental effects seem to support the Social Darwinist position widely held in the previous century).

I have no doubt that certain narrow skill sets (like piano playing, swimming, baseball) can be transmitted through parental effort. But the evidence seems to point the other way for intelligence, personality, religiosity and social attitudes. Are Chinese moms such outliers that they constitute a counterexample to the large-statistics studies cited above? It was shown by Turkheimer that in cases of extreme deprivation heritability can decrease significantly. Can Tiger Moms have the same effect at the positive end of the spectrum?

As a parent myself I am used to the very sloppy epistemology that is par for the course: we did X to the kids when they were younger, which is why they are so Y now, or: if you do X to your kids now, they are more likely to be Y later. In reality, as with any complex system, it is nearly impossible to relate cause and effect in a remotely rigorous way. Nevertheless, the world is full of (often contradictory) parenting advice, and most parents are absurdly overconfident in their opinions.


See figure below (click to enlarge) from Sources of human psychological differences: Minnesota study of twins reared apart, Bouchard et al. (p. 142). MZA = MonoZygotic twins raised Apart, MZT = MonoZygotic twins raised Together. On the personality inventories the MZA and MZT correlations are almost identical -- even more so than for g. Shared family environment did not make twins more similar in personality, and only slightly more similar in IQ. 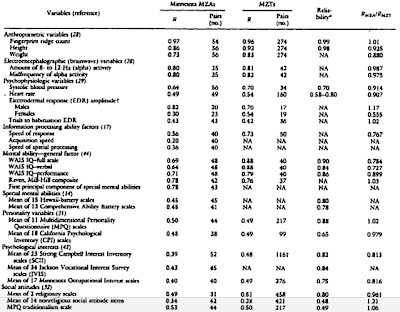 I stole this figure from Razib. It's from Turkheimer's paper showing that heritability of IQ increases with SES. Thus, Tiger Moms are fighting against diminishing returns: once the child's environment is already pretty good (say, 80th percentile SES), most variation is due to genetics. Note Turkheimer's results show more shared environmental variance than Plomin and Daniels found, but everything is consistent within errors. One objection to Turkheimer's results is that his measurements are of young children, and in other studies it is found that heritability increases with age -- perhaps because children gain more control over their lives and their genetic proclivities become more manifest.

All other psychological traits are much less heritable and therefore I would bet are more likely "shape-able".

You know what they all are, you've checked them all and you know they're all much less heritable?

Kinda like a dealers first shot is free policy you push kids initially to achieve and after they experience rewards praise respect they come back for more ad infitum. quite effective

Confirmation that personality traits are not as heritable as IQ.

I can assure you that their parenting styles are not the same as the average adoptive family, so there clearly is variation among adoptive families.

Assuming this variation is important it might not affect statistics even with 10,000 families if there are very few parents like your colleagues.

Personality traits are not as heritable, but they are (seemingly) hardly affected at all by shared family environment. Raising two MZ twins in the same family does not seem to make them more similar in personality.

"Raw" psychological traits don't seem to be permanently affected much by parenting. But there are plenty of life outcomes that matter that are, as Steve's examples of say, going to Harvard vs. UO or Michael Phelps indicate.

IMOH, when you are a carpenter with a hammer everything looks like a nail. Geneticists think it is genetic, psychologists think it is parenting style, and Chinese mothers think it is mothering. There is a large body of work on parenting style (e.g. authoritarian vs authoritative) that argues for nurture just as convincingly as the twin studies argue for genetics, I think.
I am also disturbed by the amount of parenting advice from people who don’t know what they are talking about. I wrote a post here on similar. http://michelebusby.blogspot.com/2011/01/why-western-slacker-mothers-are.html

I also would add that in addition to parenting style influencing narrow skill sets (which I think are somewhat trivial) there is also work linking parenting style to substance abuse, which would of course have major life outcomes, e.g. http://www.ncbi.nlm.nih.gov/pubmed/20553662

In general I agree with you, but my inclination before seeing the twin/adoption results was that parents could do more.

I would like to believe that a father could teach his kids to have a strong work ethic, or to cope with failure, or to take risks, but I'm not at all sure how hard wired these things are.

For example, the MZA and MZT correlations for social attitudes, religiosity are pretty similar!

Thank you for your response Herr Professor Hsu. I know how precious your time is and that most of your blog entries are written by an assistant.

If PS indeed has a linear effect we would expect to see some correlation between surveyed PS and adoptee outcomes.

Of course Herr Professor if IQ and PS had a joint bivariate normal distribution or close to it AND the sample size was SUFFICIENTLY large AND the variance of the adoptive homes wasn't too small "we" would expect a correlation, but that is not reality.

In the US Chua is not merely an outlier in a normal-like distribution of PS she isn't part of such a distribution at all. There is a GAP.

I have no doubt that certain narrow skill sets (like piano playing, swimming, baseball) can be transmitted through parental effort.

> but that is not reality

How can you be sure? You seem sure that sample sizes are too small and that variance in adoptive homes is small.

You missed the second part of the above post.

There is not a continuum in amount of swimming practice is there?

I wonder if behavior genetics is drastically different in non-WEIRD (Western, Educated, Industrialized, Rich, and Democratic) populations. There are some big differences between how family/society works in non-WEIRD societies vs WEIRD ones.

Another interesting thing to think about is how the behavior genetic profile of humanity is changing over time. Right now drugs like ritalin are becoming more and more commonplace, suggesting that the effects of the shared environment will increase, with parents able to manipulate their children's personalities more. At the same time, other forces like capitalism and modernization would seem to make nonshared/genes matter more. Interesting world we're living in, and are heading towards..