Want an elite job at the very pinnacle of 21st century capitalism? Read the rest of this post. [Additional remarks.]

Here's what I said in an earlier post How the world works: (see also Creators and Rulers.)


Go to the web sites of venture capital, private equity or hedge funds, or of Goldman Sachs, and you’ll find that HYPS alums, plus a few Ivies, plus MIT and Caltech, are grossly overrepresented. (Equivalently, look at the founding teams of venture funded startups.)

Most top firms only recruit at a few schools. A kid from a non-elite UG school has very little chance of finding a job at one of these places unless they first go to grad school at, e.g., HBS, HLS, or get a PhD from a top place. (By top place I don’t mean “gee US News says Ohio State’s Aero E program is top 5!” — I mean, e.g., a math PhD from Berkeley or a PhD in computer science from MIT — the traditional top dogs in academia.)

This is just how the world works. I won’t go into detail, but it’s actually somewhat rational for elite firms to operate this way ...

The paper below is by a Kellogg (Northwestern) management professor, Lauren Rivera. No offense to Rivera, because she gets things mainly right, but much of (good) social science seems like little more than documenting what is obvious to any moderately perceptive person with the relevant life experience. Bad social science, on the other hand, often means completely missing things that a moderately perceptive person would have noticed! ;-)

In reading the excerpts below, keep in mind Rivera's slightly different emphasis on law, consulting and I-banking, as opposed to hedge/venture funds and startups (more quant/technology focused) in my post.

Ivies, extracurriculars, and exclusion: Elite employers’ use of educational credentials

... In the following article, I analyze how hiring agents in top-tier professional service firms use education to recruit, assess, and select new hires. I find that educational credentials were the most common criteria employers used to solicit and screen resumes. However, it was not the content of education that elite employers valued but rather its prestige. Employers privileged candidates who possessed a super-elite (e.g., top 5) university affiliation and attributed superior cognitive, cultural, and moral qualities to candidates who had been admitted to such an institution, regardless of their actual performance once there. However, attendance at a super-elite university was insufficient for success in resume screens. Importing the logic of elite university admissions, firms performed a secondary resume screen on the status and intensity of candidates’ extracurricular accomplishments and leisure pursuits. I discuss these findings in terms of the changing nature of credentialism and stratification in higher education to suggest that participation in formalized extracurricular activities has become a new credential of moral character that has monetary conversion value in labor markets.

Below are some excerpts from the paper.


... So-called “public Ivies” such as University of Michigan and Berkeley were not considered elite or even prestigious in the minds of evaluators (in contrast, these “state schools” were frequently described pejoratively as “safety schools” that were “just okay”). Even Ivy League designation was insufficient for inclusion in the super-elite. For undergraduate institutions, “top-tier” typically included only Harvard, Princeton, Yale, Stanford, and potentially Wharton (University of Pennsylvania's Business School). By contrast, Brown, Cornell, Dartmouth, and University of Pennsylvania (general studies) were frequently described as “second tier” schools that were filled primarily with candidates who “didn’t get in” to a super-elite school.

Definitions of “top-tier” were even narrower for professional schools, primarily referring to Yale, Harvard, Stanford, and to a lesser extent Columbia law schools, and Harvard, Wharton (University of Pennsylvania), and Stanford business schools.7 A consulting director (white, female) illustrates, “Going to a major university is important. Being at the big top four schools is important. Even it's a little more important being at Harvard or Stanford [for MBAs]; you know it's just better chances for somebody.” A consultant (Asian-American, male) described of being at a “top” school, “It's light-years different whether or not we are going to consider your resume.”

Evaluators relied so intensely on “school” as a criterion of evaluation not because they believed that the content of elite curricula better prepared students for life in their firms – in fact, evaluators tended to believe that elite and, in particular, super-elite instruction was “too abstract,” “overly theoretical,” or even “useless” compared to the more “practical” and “relevant” training offered at “lesser” institutions – but rather due to the strong cultural meanings and character judgments evaluators attributed to admission and enrollment at an elite school. I discuss the meanings evaluators attributed to educational prestige in their order of prevalence among respondents.


In line with human capital, screening, and signaling accounts of the role of educational credentials in hiring (see Bills, 2003 for review), participants overwhelmingly believed the prestige of one's educational credentials was an indicator of their underlying intelligence. Evaluators believed that educational prestige was a signal of general rather than job-specific skills, most notably the ability to learn quickly. An attorney (white, female) described, “I’m looking for sponges. You know a kid from Harvard's gonna pick stuff up fast.” However, it was not the content of an elite education that employers valued but rather the perceived rigor of these institutions’ admissions processes. According to this logic, the more prestigious a school, the higher its “bar” for admission, and thus the “smarter” its student body. A consultant (white, male) explained, “The top schools are more selective, they’re reputed to be top schools because they do draw a more select student body who tend to be smarter and more able.” A law firm partner (white, male) agreed, “If they’re getting into a top-tier law school, I assume that person has more intellectual horsepower and, you know, is more committed than somebody who goes to a second or third tier law school.”

In addition to such an intelligence-based perspective on university admissions, evaluators frequently adopted an instrumental and unconstrained view of university enrollment, perceiving that students typically “go to the best school they got into” (lawyer, Hispanic, male). Consequently, in the minds of evaluators, prestige rankings provided a quick way to sort candidates by “brainpower.” When sorting the “mock” resumes, an investment banking recruiter (white, female) charged with screening resumes at her firm revealed how such assumptions played out in application review. She remarked, “Her [Sarah's] grades are lower but she went to Harvard so she's definitely well-endowed in the brain category…Jonathan… went to Princeton, so he clearly didn’t get the short end of the stick in terms of smarts.” This halo effect of school prestige, combined with the prevalent belief that the daily work performed within professional service firms was “not rocket science” (see Rivera, 2010a) gave evaluators confidence that the possession of an elite credential was a sufficient signal of a candidate's ability to perform the analytical capacities of the job. Even in the quantitatively rigorous field of consulting [HA HA HA], a junior partner (white, male) asserted, “I’ve come to the stage where I trust that if the person has gone to Wharton, they can do math.”

By contrast, failure to attend an “elite” school, as conceptualized by evaluators, was an indicator of intellectual failure, regardless of a student's grades or standardized test scores. Many evaluators believed that high achieving students at lesser ranked institutions “didn’t get in to a good school,” must have “slipped up,” or otherwise warranted a “question mark” around their analytical abilities. ...

An investment banker (white, female) expressed a sentiment that was common across firms, “The best kid in the country may be at like Bowling Green, right. But to go to Bowling Green, interview 20 kids just to find that one needle in the haystack doesn’t make sense, when you can go to Harvard it's like 30 kids that are all super qualified and great.”

The finding that elite employers largely restrict the bounds of competition to students at the nation's most elite universities is important because large-scale studies of status attainment have historically focused on estimating the effect of years of schooling or college completion rather than institutional prestige in explaining occupational outcomes. ...


... By contrast, those without significant extracurricular experiences or those who participated in activities that were primarily academically or pre-professionally oriented were perceived to be “boring,” “tools,” “bookworms,” or “nerds” who might turn out to be “corporate drones” if hired. A consultant (white, male) articulated the essence of this sentiment: "We like to interview at schools like Harvard and Yale, but people who have like 4.0s and are in the engineering department but you know don’t have any friends, have huge glasses, read their textbooks all day, those people have no chance here…I have always said, [my firm] is like a fraternity of smart people." ...

A banker (white, male) summarized the tradeoff evaluators believed they were facing, “I would trade an outgoing, friendly confident person for a rocket scientist any day.”


Here's an article about the research in the Chronicle of Higher Education:


If you want to get a job at the very best law firm, investment bank, or consultancy, here’s what you do:

1. Go to Harvard, Yale, Princeton, or (maybe) Stanford. If you’re a business student, attending the Wharton School at the University of Pennsylvania will work, too, but don’t show up with a diploma from Dartmouth or MIT. No one cares about those places.

2. Don’t work your rear off for a 4.0. Better to graduate with 3.7 and a bunch of really awesome extracurriculars. And by “really awesome” I mean literally climbing Everest or winning an Olympic medal. Playing intramurals doesn’t cut it.

That’s the upshot of an enlightening/depressing study about the ridiculously narrow-minded people who make hiring decisions at the aforementioned elite companies. The author of this study—Lauren Rivera, an assistant professor of management and organizations at Northwestern University—gained inside access to the hiring process at one such (unnamed) business, and picked the brains of recruiters at other firms.

The portrait that emerges is of a culture that’s insanely obsessed with pedigree. These firms pour resources into recruiting students from “target schools” (i.e., Harvard, Yale, Princeton) and then more or less ignore everybody else. Here’s a manager from a top investment bank describing what happens to the resume of someone who went to, say, Rutgers: “I’m just being really honest, it pretty much goes into a black hole.”

What’s surprising isn’t that students from elite universities have a leg up; it’s that students from other colleges don’t have a chance, even if those colleges are what the rest of us might consider elite. Here’s what a top consultant had to say about M.I.T.:

You will find it when you go to like career fairs or something and you know someone will show up and say, you know, “Hey, I didn’t go to HBS [Harvard Business School] but, you know, I am an engineer at M.I.T. and I heard about this fair and I wanted to come meet you in New York.” God bless him for the effort but, you know, it’s just not going to work.

There are exceptions, but only if the candidate has some personal connection with the firm. And the list of super-elite schools varies somewhat depending on the field. For instance, Columbia might be considered elite by some investment banks, but others describe it as ”second-tier” or “just okay.”

So going to Harvard is a prerequisite. But you also need to prove, in the words of the recruiters, that you’re not “boring,” a “tool,” or a ”bookworm.” This is where your leisure pursuits come in. Among the acceptable extra-curricular activities listed in the paper: traveling with a world-renowned orchestra and building houses in Costa Rica. It’s good to play sports, but they have to be the right ones. Being on the crew team is acceptable; being on the ping-pong team is not. Ideally, you should be a national or Olympic champion. And if you like hiking, you should summit some impressive peak. ... 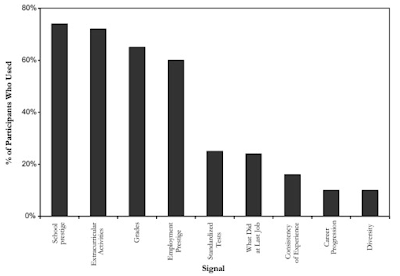