This was recommended by a commenter on my previous post. It's definitely worth watching if you have an interest in the financial crisis.

Here's a recommendation for her book:

"[T]he book’s real strength is the sub-plot that emerges as Tavakoli tugs vigorously at the seemingly disparate threads of the current financial crisis, naming names, citing cases and leaving no schmuck — whether investment bank, credit rating agency, monoline insurer, mortgage brokers, regulators and their ilk — unspared. Based on more than 20 years in the derivatives arena, and having served time at Salomon Bros, Bear Stearns and Goldman Sachs, she knows that of what and who she speaks. Should anyone ever display the slightest interest in criminalizing the criminals who led us down this path, a prosecutor could do worse than ordering up copies for the grand jury."

Here's a nice figure from her web site: 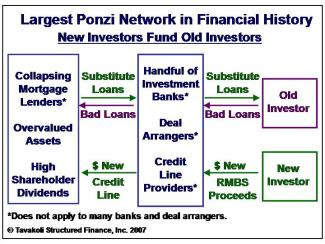