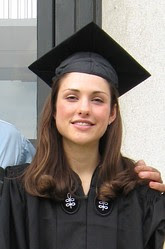 Last October, Barnett-Hart, already pulling all-nighters at the bank (we agreed to not name her employer), received a call from Lewis, who had heard about her thesis from a Harvard doctoral student. Lewis was blown away.

“It was a classic example of the innocent going to Wall Street and asking the right questions,” said Mr. Lewis, who in his 20s wrote “Liar’s Poker,” considered a defining book on Wall Street culture. “Her thesis shows there were ways to discover things that everyone should have wanted to know. That it took a 22-year-old Harvard student to find them out is just outrageous.”

Barnett-Hart says she wasn’t the most obvious candidate to produce such scholarship. She grew up in Boulder, Colo., the daughter of a physics professor and full-time homemaker. A gifted violinist, Barnett-Hart deferred admission at Harvard to attend Juilliard, where she was accepted into a program studying the violin under Itzhak Perlman. After a year, she headed to Cambridge, Mass., for a broader education. There, with vague designs on being pre-Med, she randomly took “Ec 10,” the legendary introductory economics course taught by Martin Feldstein.

“I thought maybe this would help me, like, learn to manage my money or something,” said Barnett-Hart, digging into a granola parfait at Le Pain Quotidien. She enjoyed how the subject mixed current events with history, got an A (natch) and declared economics her concentration.

Barnett-Hart’s interest in CDOs stemmed from a summer job at an investment bank in the summer of 2008 between junior and senior years. During a rotation on the mortgage securitization desk, she noticed everyone was in a complete panic. “These CDOs had contaminated everything,” she said. “The stock market was collapsing and these securities were affecting the broader economy. At that moment I became obsessed and decided I wanted to write about the financial crisis.”

Back at Harvard, against the backdrop of the financial system’s near-total collapse, Barnett-Hart approached professors with an idea of writing a thesis about CDOs and their role in the crisis. “Everyone discouraged me because they said I’d never be able to find the data,” she said. “I was urged to do something more narrow, more focused, more knowable. That made me more determined.”

She emailed scores of Harvard alumni. One pointed her toward LehmanLive, a comprehensive database on CDOs. She received scores of other data leads. She began putting together charts and visuals, holding off on analysis until she began to see patterns–how Merrill Lynch and Citigroup were the top originators, how collateral became heavily concentrated in subprime mortgages and other CDOs, how the credit ratings procedures were flawed, etc.

“If you just randomly start regressing everything, you can end up doing an unlimited amount of regressions,” she said, rolling her eyes. She says nearly all the work was in the research; once completed, she jammed out the paper in a couple of weeks.

“It’s an incredibly impressive piece of work,” said Jeremy Stein, a Harvard economics professor who included the thesis on a reading list for a course he’s teaching this semester on the financial crisis. “She pulled together an enormous amount of information in a way that’s both intelligent and accessible.”

Barnett-Hart’s thesis is highly critical of Wall Street and “their irresponsible underwriting practices.” So how is it that she can work for the very institutions that helped create the notorious CDOs she wrote about?

“After writing my thesis, it became clear to me that the culture at these investment banks needed to change and that incentives needed to be realigned to reward more than just short-term profit seeking,” she wrote in an email. “And how would Wall Street ever change, I thought, if the people that work there do not change? What these banks needed is for outsiders to come in with a fresh perspective, question the way business was done, and bring a new appreciation for the true purpose of an investment bank - providing necessary financial services, not creating unnecessary products to bolster their own profits.”

Ah, the innocence of youth.

Here is the thesis.

Visit msnbc.com for breaking news, world news, and news about the economy

Ah, the innocence of youth.

She did not go to work for a nonprofit or the SEC. I perceive her as tough-minded but prudently aware of her inexperience.

It wouldn't surprise me, health permitting, to hear of her again.

It has already been reported in the news that she is working for Goldman Sachs, so her desire for confidentiality is understandable. The larger question in my mind is whether her idealism will corrode due to ideological capture from inside the banking system and the anesthetic effects of large salaries. I would take even odds the answer is yes. Also I wonder what Goldman's motivations here are for hiring her.

"After writing my thesis, it became clear to me that the culture at these investment banks needed to change and that incentives needed to be realigned to reward more than just short-term profit seeking". Oh please, Steve. How about the cynicism of youth?

But this [repackaging debt and reselling it as some kind of investment option] is common knowledge. I remember watching videos directly after the crisis claiming the same thing exactly.

Whenever i see the post like your's i feel that there are still helpful people who share information for the help of others, it must be helpful for other's. thanx and good job.