Science 11 July 2008: A new study has found that the most likely undergraduate alma mater for those who earned a Ph.D. in 2006 from a U.S. university was … Tsinghua University. Peking University, its neighbor in the Chinese capital, ranks second. Between 2004 and 2006, those two schools overtook the University of California, Berkeley, as the most fertile training ground for U.S. Ph.D.s (see graph). South Korea's Seoul National University occupies fourth place behind Berkeley, followed by Cornell University and the University of Michigan, Ann Arbor.

Of course, the schools listed above all have large enrollments. If you normalize by undergraduate population the top school is Caltech. (Almost 40 percent of Caltech undergrads go on to earn a doctorate.) 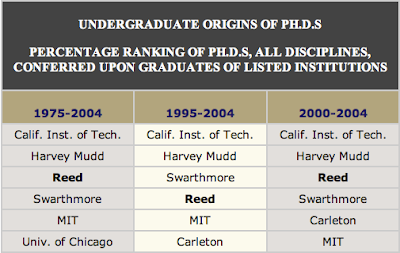 I was at Tsinghua in December. Surprisingly, they don't heat the buildings in winter -- even the school of management had freezing cold hallways (individual offices and classrooms are heated). It seems brutal, but it's very green! Apparently 40 percent of the US energy budget goes to heating and cooling buildings. Just look at your winter heating bill and you can understand why central heating is a luxury in developing countries (energy is a tradeable).
Posted by Steve Hsu at 8:17 PM

"(Almost 50 percent of Caltech undergrads go on to earn a doctorate.)"

But in order to make money with a science/engineering degree you have to have a Phd. Compare with business schools where you can get a BA in accounting and be fine, or just get an MBA.

Huh? Engineers can go to business school as well. Also, I think the traditional earnings sweet spot for engineers was a masters degree.

Show me another school where 50% of the undergrads are remotely capable of attempting a PhD.

Okay your right. And I agree that Caltech is exceptional (and probably has the most intelligent students in the USA per capita).

Let me change and refine what I wrote. I believe that engineers can make good money with just a BA or a masters for that matter. Science grads, OTOH, tend to need a PhD more than others.

Heh. A non-trivial fraction of Chinese IMO medalists join Tsinghua's Math and TCS departments, so I'd wager that many of them not only do their Ph.Ds in the US, but go to the very best American grad schools.

About I.I.T. I recall reading a theorist blog about how students were no longer applying to grad school as they used to earlier. Link here: http://blog.computationalcomplexity.org/2008/04/what-happened-to-indians.html

There's a fellow graduate student who happens to be from that one of those schools who claims he was the only person from his department applying for a Ph.D this year.

Kinda shows how the Chinese attitude towards learning is not matched by any other country in the world at this point in time.